Philip Gradwell, Chief Economist at Chainalysis believes that Bitcoin is maturing as an asset.

Keep your laser-eyes handy and don’t let a little dip phase you — according it its many avid supporters, 2021 is still the year of Bitcoin. Despite the recent dip, Bitcoin is in recovery at $47,936 at time of writing and looking to cross back over the $50,000 mark.

Scott Melker, known as “The Wolf of All Streets” said, “The recent (BTC) dip is most likely a minor correction.” He pointed out that the 2015 BTC bull run had five price corrections.

This interview was part of a report on Bitcoin outlook for 2021 and would like to share his responses in total (with some editing for length) here. These responses were last updated on February 11th, so do not refer to any subsequent actions in the crypto market.

If recent history has taught me anything it is that an outlook over a year is very difficult! In the short and medium-term I expect price volatility in cryptocurrency.

In the short-term, I expect price volatility as liquidity is building upon exchanges as people look to flip assets if the price rises further, and also because people are selling non-Bitcoin assets as they reach high prices.

Of course, if there continues to be positive news for crypto, such as more companies buying Bitcoin, like Tesla or Microstrategy, then this is likely to bring in a lot of demand, potentially far in excess of short-term sellers. If this happens, then Bitcoin could maintain and exceed its current record prices.

In the medium-term, I expect that new buyers could drive price volatility. They are now a force in the market, with 2.7 million bitcoin held for less than one month, similar to peak levels in 2017. Many have experienced significant USD gains and are starting to realize them, with bitcoin that has been held for less than one month and has made a 25% or more USD gain since being acquired being sent in similar quantities now as in late 2017. Historically this has put pressure on price unless demand is very strong.

However, in the longer-term, I do expect demand for cryptocurrencies to remain strong, especially for bitcoin. The pandemic, and the economic policy response of government spending funded by expansionary monetary policy, certainly led to the demand for Bitcoin in 2020, as it is an asset with limited supply and therefore a good inflation hedge. Unfortunately, the economic consequences of the pandemic are likely to be with us for at least the next couple of years. So Bitcoin is likely to perform well in this period.

The key question is whether people start to sell Bitcoin as the economy recovers and inflation concerns do not materialize. This is likely unless bitcoin develops a new use case in the meantime. For example, bitcoin could become the highest quality capital to deploy in decentralized finance projects.

This is a key value proposition for Bitcoin – gold is not going to develop new cases, while, because bitcoin is a digital asset in a fast-evolving industry, owning bitcoin gives holders an option to benefit from new innovations. So the 2021 prospects for bitcoin depend on the state of the broader economy, while prospects beyond 2021 depend on innovation in digital assets.

“Altcoin Season” — has this happened but not as dramatically?

Non-Bitcoin assets have certainly seen strong price performance but the correlation with the bitcoin price has weakened. I think this is because different cryptocurrencies have developed distinct use cases since mid-March, in particular bitcoin, Ethereum, and Tether. Bitcoin and Tether are increasingly used to store value digitally, with bitcoin offering exposure to price volatility and Tether avoiding this. Ethereum on the other hand is actively being used, primarily in DeFi, rather than being held as a passive investment. So people do not just want exposure to crypto now — whatever crypto it is. Instead, they want to own specific assets for specific reasons. So the success of non-bitcoin assets will depend on their use cases more now than it has in the past.

Are HODLers getting carried away? Is the hype justified?

HODLers can always be relied on to get carried away. But the current price performance is different from the past. The big difference is the entry of large investors, particularly from mid-March. At that time, the Bitcoin price fell sharply along with broader financial markets, but investors saw this as a moment to buy more Bitcoin. This has meant there is less and less bitcoin available for new buyers to acquire, meaning they have to offer higher prices if they want to purchase. 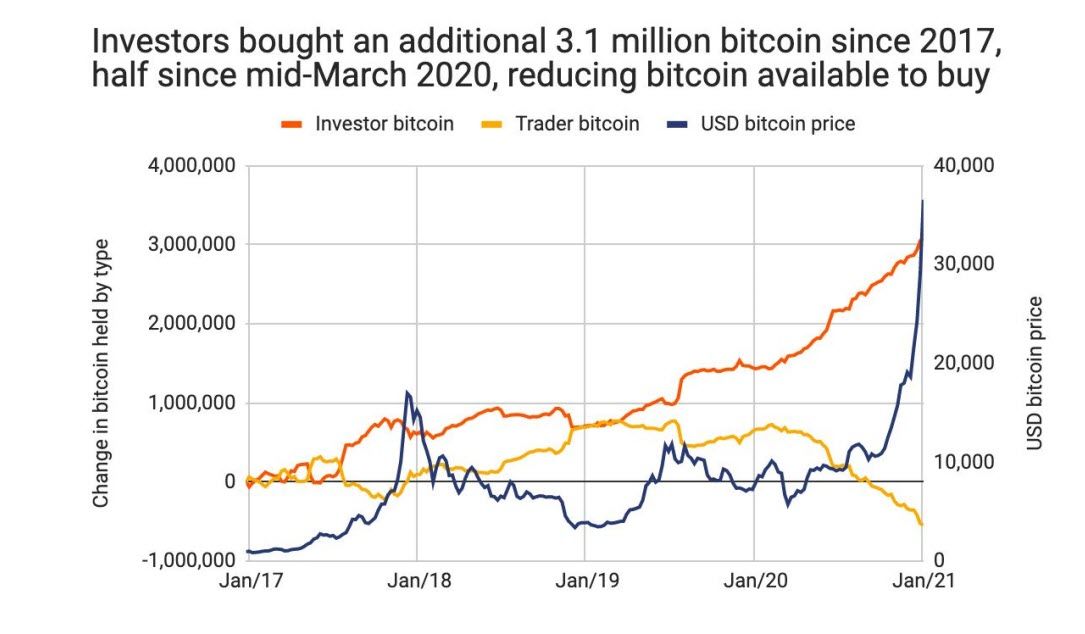 What factors are people NOT paying enough attention to?

The fact there is a lot to pay attention to at least suggests that cryptocurrencies are maturing as an asset, as they are now driven by a more complicated set of demands than just speculation. I think the most surprising thing for me in 2020 is that the microstructure of the market proved remarkably resilient. There were fewer exchange outages, and shocks to the system, such as enforcement action against BitMEX or OKEx pausing withdrawals, did not have much impact on the functioning of the market. This gives me hope that there are fewer industry-related risks in crypto than there were before, which makes it easier for new investors to enter.

Create your free account to unlock your custom reading experience.