Home
/
Bitcoin
/
Bitcoin soars above US$23,000 as more Wall Street firms pile in

Bitcoin breached US$23,000 for the first time in history as more Wall Street names crowd into the the world’s largest digital currency up 220 per cent this year.

The digital coin jumped more than nine per cent on Thursday, touching a high of US$23,256.92, according to a composite of prices compiled by Bloomberg. Bitcoin and the wider Bloomberg Galaxy Crypto Index have both more than tripled this year. Cryptocurrency-linked stocks in South Korea, Japan and China climbed.

The rally in digital assets is polarizing opinion, given Bitcoin’s history of boom and bust. Proponents argue the cryptocurrency is muscling in on gold as a portfolio diversifier amid dollar weakness and potential inflationary pressure. Others see speculative fervor that will inevitably lead to a bust akin to the meltdown three years ago after a furious Bitcoin rally.

Yet there are signs that longer term investors like asset managers and family offices are playing more of a role this time around, alongside trend-following quant funds. Bitcoin’s scarcity combined with “rampant money printing” by the Federal Reserve mean the digital token should eventually climb to about US$400,000, Scott Minerd, the chief investment officer at Guggenheim Investments, said on Bloomberg TV on Wednesday. 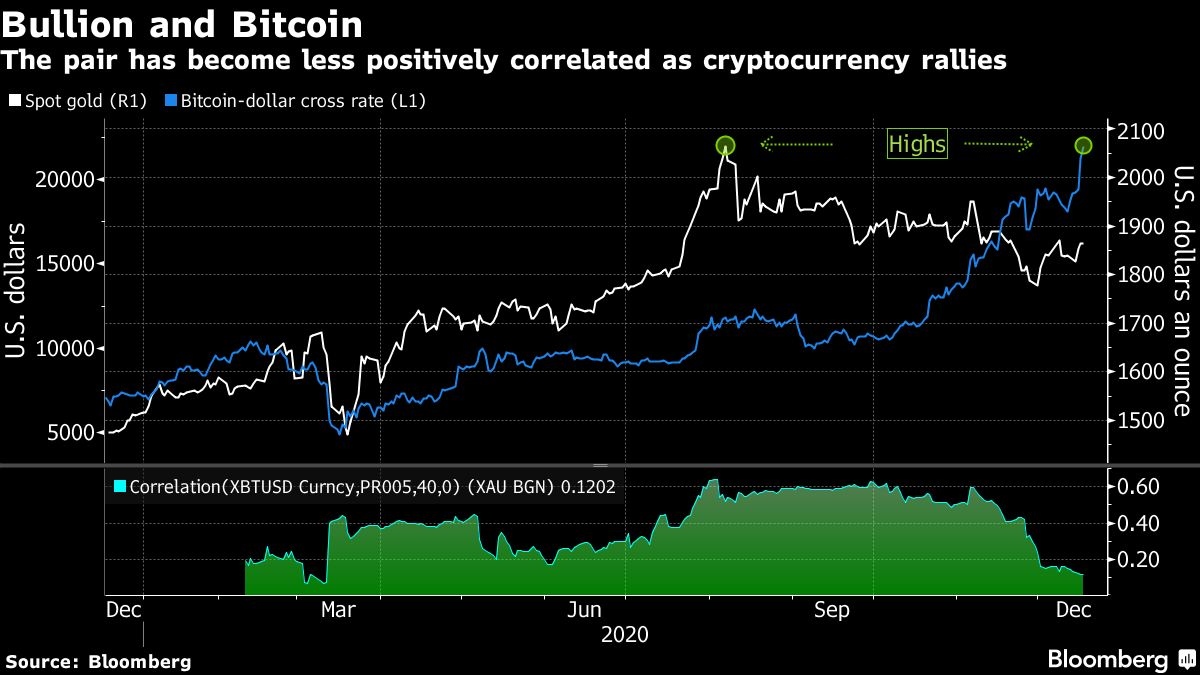 Here’s what people in markets are saying about Bitcoin’s move:

The “price will now go from linear to parabolic” in part because retail investors have so far largely been “out of this rally,” said Kay Van-Petersen, global macro strategist at Saxo Capital Markets Pte in Singapore.

The digital age is finally coming to finance: Novogratz on Bitcoin rally and IPO

“The move above US$20,000 has been coming and I’m probably a little surprised it didn’t come sooner,” said Craig Erlam, senior market analyst at Oanda Europe Ltd. “Fed stimulus may have given it an extra kick but, let’s face it, Bitcoin doesn’t need it. A break above US$20,000 may bring the buzz and a strong end to the year.”

“The lowest-ever Bitcoin annual volatility measure versus gold and the stock market near the end of 2020 may sustain the crypto’s performance advantage in 2021,” said Bloomberg Intelligence strategist Mike McGlone in a report. He sees the price ratio of Bitcoin-to-gold headed for 100, if history is repeated, from its current level of around 12.

If Bitcoin sustains its momentum, then “testing US$36,000 will be the next real objective,” said Dan Gunsberg, CEO of Hxro, a crypto trading platform. But he indicated that a significant break below US$13,800 would herald a much weaker period.

–With assistance from Nancy Moran.