Analysis of a dying polar explorer’s last diary entry has shed light on his final moments more than 100 years ago.

Jørgen Brønlund was a participant in the tragic 1906 expedition to Greenland, along with expedition leader Ludvig Mylius-Erichsen and another explorer who perished trying to make their way back to base camp.

Brønlund was found months later, along with his journal that included his final entry and a mysterious black smudge that has puzzled scientists for decades.

A new analysis of the spot, indicates it is made of burnt rubber, petroleum, oil and human excrement.

Researchers believe the doomed explorer was frantically trying to start his kerosene burner to keep warm, but failed and froze to death.

Scroll down for video 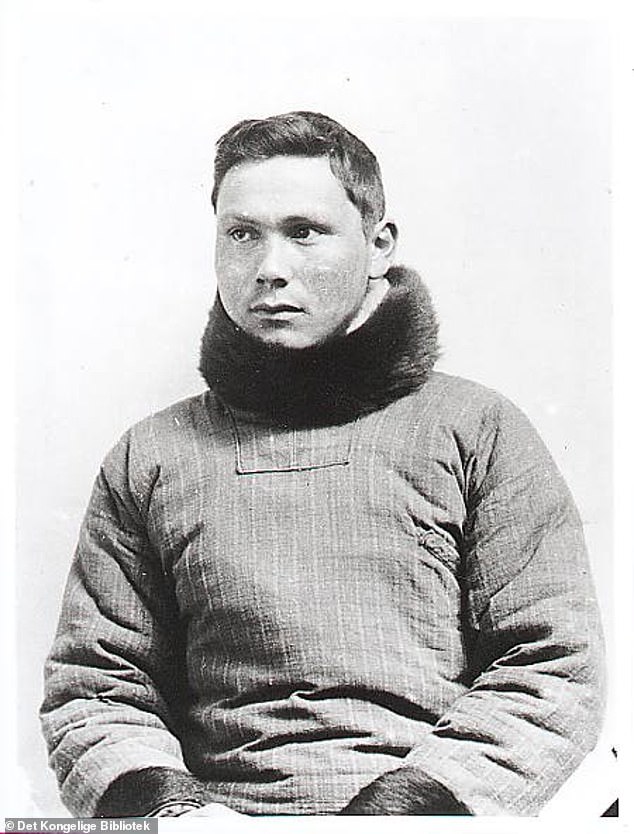 Jørgen Brønlund was one of three explorers to perish in Ludvig Mylius-Erichsen’s 1906 expedition to Greenland. Analysis of of a black smudge in Brønlund’s final journal entry indicates he was vainly trying to start his kerosene stove before freezing to death

The voyage, sponsored by Denmark, was intended to map uncharted lands and determine whether northern Greenland’s Peary Land was an island or a peninsula.

If it was an island, ownership of the 19,000-square-mile territory would switch from Denmark to the United States.

Brønlund, a Greenland-born Inuit, joined Mylius-Erichsen on an earlier expedition and traveled to Denmark to study drawing.

An expert interpreter, he was enlisted in the 1906 expedition to keep a travel diary and drive the sled dogs. 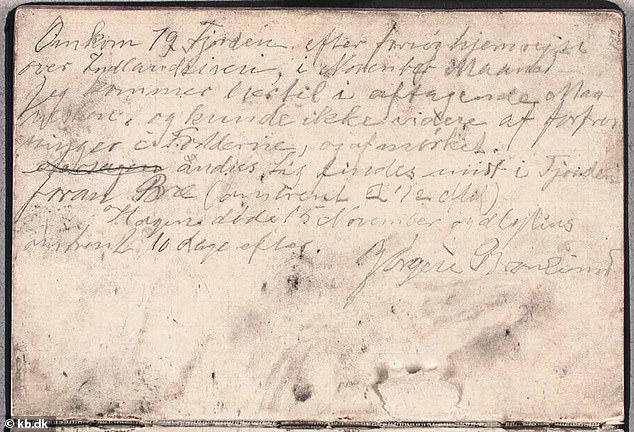 Brønlund’s final diary entry: ‘I reached this place under a waning moon and cannot go on because of my frozen feet and the darkness. The bodies of the others are in the middle of the fjord.’ A black smudge under his name has long puzzled scientists and was stolen by an unnamed researcher in the 1990s for analysis 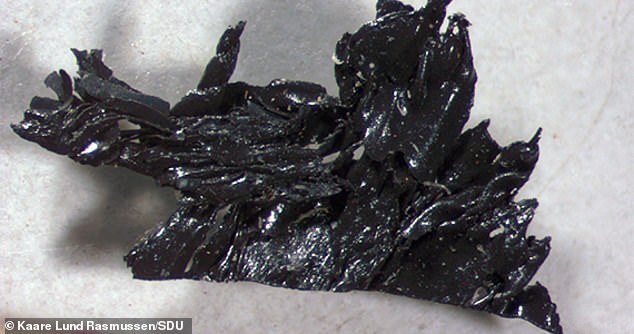 According to modern analysis, the spot consists of burnt rubber, petroleum, fish oil, and human feces. That suggests Brønlund was trying desperately to preheat his kerosene stone with oiled fabric—and even his own feces—before succumbing to the cold

After a grueling journey, Mylius-Erichsen, Brønlund and explorer Niels Peter Høegh Hagen were separated from the rest of the team.

They died trying to return to base camp from Independence Fjord, near the northern tip of Greenland.

Brønlund was the last to die, succumbing to frostbite and hunger in March 1907.

His frozen body was discovered four months later in a small cave near a depot on Lambert Land, with his diary at his feet.

The final entry read: ‘I reached this place under a waning moon and cannot go on because of my frozen feet and the darkness. The bodies of the others are in the middle of the fjord.’

Erichsen and Hagen had succumbed a few days before, he indicated, though their corpses and diaries have never been found.

Under Brønlund’s final words and his signature was a noticeable black smudge.

The spot had been something of a puzzle for years: In 1993, an unnamed researcher even removed it without permission and brought it to the National Museum of Denmark for analysis.

At the time, the museum’s experts were stumped, but researchers at the University of Southern Denmark have used technology not available in 1993 to scan the smudge at the atomic level. 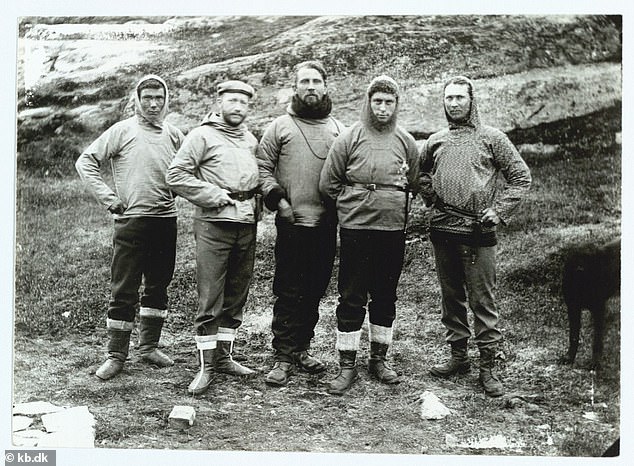 Brønlund (far left), a Greenland-born Inuit, was an expert interpreter enlisted in the 1906 expedition to keep a travel diary and drive the sled dogs. Expedition leader Ludvig Mylius-Erichsen (center) also died in the journey

According to their report in the journal Archaeometry, the spot consists of burnt rubber, petroleum, some kind of oil, and human feces.

‘This new knowledge gives a unique insight into Brønlund’s last hours,’ said Kaare Lund Rasmussen, a professor of chemistry at the university and lead author of the new study.

Rasmussen says the substances on the page suggest Brønlund was trying desperately to find something to light his portable stove and warm himself.

‘At this time, Brønlund had starved for weeks, was tired beyond his capacity, and he was freezing,’ he wrote. ‘It is likely that his hands were shaking when he used the matches from the depot to preheat and turn on the stove in the small cave.’ 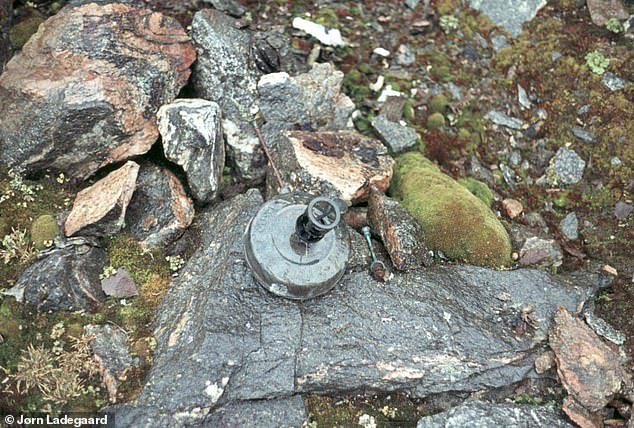 He had petroleum and matches, but the burner required some kind of metabolized alcohol to get going.

‘You can use paper or oiled fabric, but it is difficult,’ Rasmussen said. ‘We think he tried with the oils available—because the black spot contains traces of vegetable oil and oils that may come from fish, animals or wax candles.’

The mark contained calcite, rutile and zincite, minerals not found in northern Greenland but frequently used in the production of rubber.

Rasmussen believes it was from a charred gasket on Brønlund’s kerosene stove, which may have burned in his frantic attempt to start a fire.

And In his severely weakened state, Live Science reports, Brønlund may have also tried burning his own excrement to get the stove going.

‘I see how he—weakened and with dirty, shaking hands—fumbled in an attempt to light the burner, but failed,’ said Rasmussen.

Brønlund was buried where he was found. He was just 30 years old.

The Danish Defense Sirius Patrol found his Lux burner in 1973 and donated it to the Arctic Institute in Copenhagen.

The diary is kept at the city’s Royal Danish Library, while a memorial stone in the harbor quotes his final entry.