The year 2020 was perhaps the best for Bitcoin ever,not only because of the price action but also for the massive increase in institutional interest. Currently, Bitcoin market capitalization is $382 billion after the digital asset hit $20,700 for the first time ever.

During 2020, Bitcoin has received support from many prominent payment platforms, most notably PayPal. Even some of the oldest Bitcoin haters out there have changed their stances about the digital asset in the past year as worldwide adoption seems practically inevitable at this point.

The largest Bitcoin trust fund, Grayscale, has made significant investments into the digital asset throughout 2020. The fund holds more than 500,000 Bitcoins and has also heavily invested in other cryptocurrencies like Ethereum, Ethereum Classic, Zcash, and others.

More recently, MicroStrategy announced its plan to raise over half a million dollars to buy more Bitcoin. In a press release on December 8, 2020, the company said it plans to offer around $550 million worth of convertible bonds to raise funds to purchase even more Bitcoin. The company already holds around 40,000 BTC in total.

Other significant investments include Square, which was founded by Jack Dorsey, the current CEO of Twitter. Square invested $50 million in Bitcoin in order to diversify its balance sheet. Similarly, MassMutual also announced the purchase of $100 million worth of Bitcoin in December 2020.

Bitcoin has seen a massive increase in buying pressure throughout 2020 after the initial global crash in March at the beginning of  the coronavirus pandemic.

Companies rush to support Bitcoin and other cryptocurrencies

Cryptocurrency adoption has grown tremendously in 2020. Chainalysis, a Blockchain analysis company, has developed the Global Cryptocurrency Adoption Index, which shows the adoption of crypto-assets around the world. 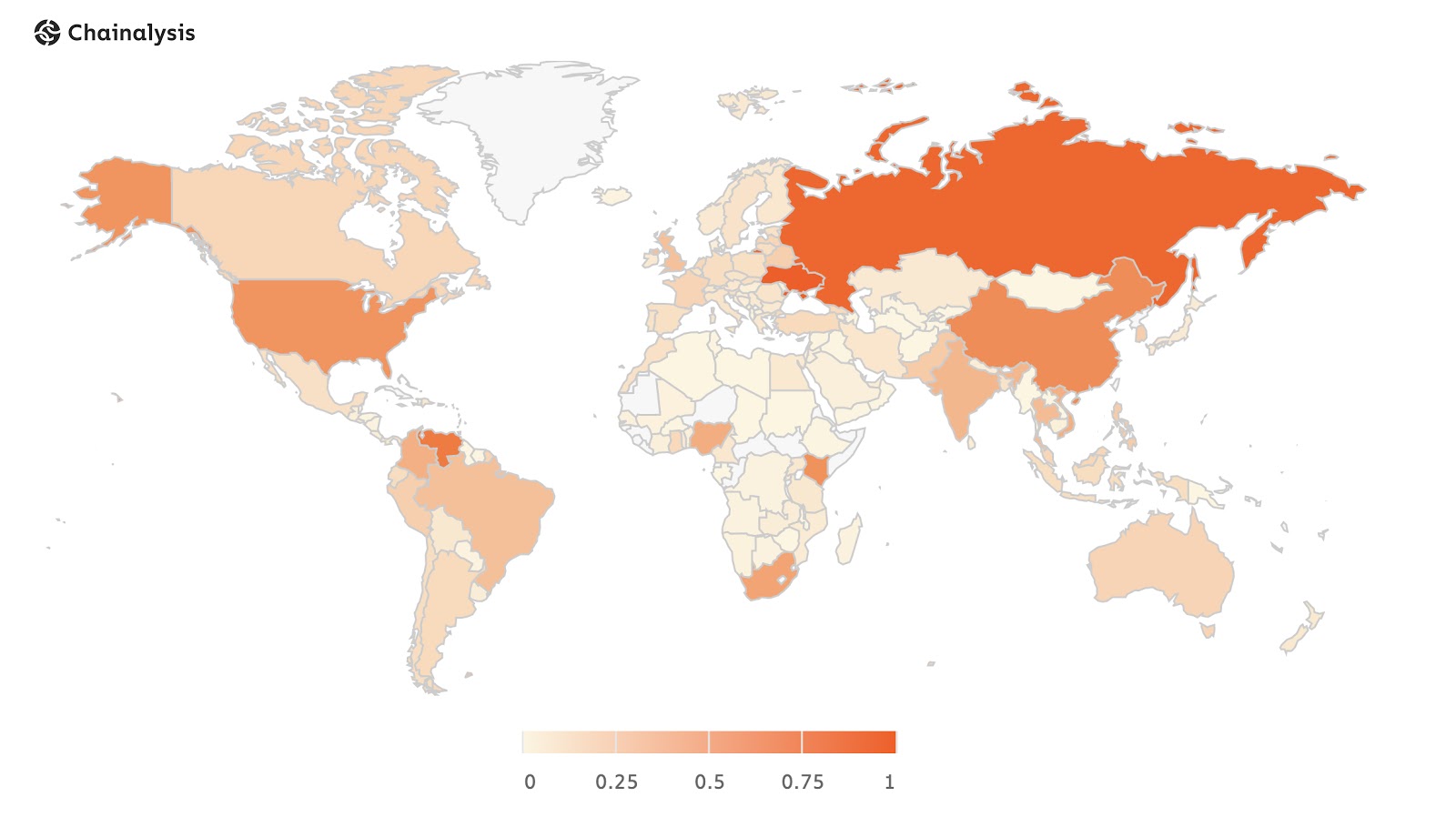 According to Chainalysis data, it seems that Russia and Ukraine lead the adoption,  with China and the United States following closely. One of the most significant announcements for the crypto market was from PayPal, which now allows US customers to purchase digital assets through the platform.

PayPal announced the launch of a new service that enables users to buy, sell, and hold cryptocurrencies in October 2020. This announcement was also one of the main propellers of Bitcoin’s recent rally. Dan Schulman, President and CEO of PayPal stated:

“The shift to digital forms of currencies is inevitable, bringing with it clear advantages in terms of financial inclusion and access; efficiency, speed, and resilience of the payments system; and the ability for governments to disburse funds to citizens quickly.”

JPMorgan, the American multinational investment bank, has backed this view, stating that Bitcoin’s adoption has only begun. JPMorgan Chase & Co has recently noted that gold will be suffering because of Bitcoin, as money is being shifted towards the digital asset.

DBS Bank, which was known for calling Bitcoin a Ponzi scheme back in 2017, has recently announced the launch of a cryptocurrency exchange featuring Bitcoin, Ethereum, Bitcoin Cash and XRP.

Financial institutions around the world are increasingly interested in digital assets like Bitcoin. Laurence Fink, CEO of investment management firm BlackRock, has said that Bitcoin is gaining a lot of legitimacy as an asset class.

#Bitcoin is conducting a 51% attack on the world’s fiat money supply.

The price of BTC in fiat will go to infinity because none of the world’s worthless flag money will survive. None of it ever has over the past 300 years.

Max Keiser, a Bitcoin pioneer, jokingly said on Twitter that BTC is “conducting a 51% attack on fiat.” Keiser was referring to Bitcoin’s limited supply versus the inflation rate of the dollar.

One of the most popular prediction models for Bitcoin is the Stock-to-Flow model, which is based on halvings and the deflationary value of the flagship cryptocurrency. The chart below puts Bitcoin at a potential target of $100,000 by the end of 2021. 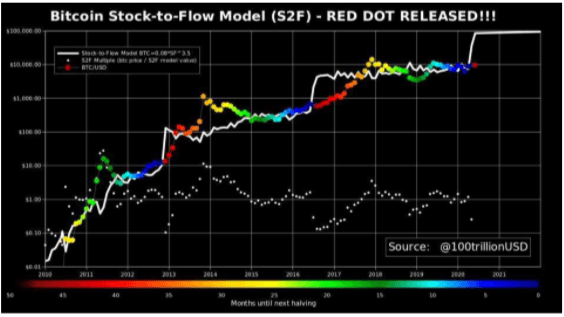 Additionally, according to the creator of the model, PlanB, Bitcoin is poised to reach $1,000,000 within the next decade. Similarly, the Winklevoss twins, founders of Gemini exchange and holders of a large portion of BTC, have also stated that the digital asset is nowhere near  its final price.

“We think it will be the best performing asset of the current decade. Our thesis is that Bitcoin is gold 2.0 and it will disrupt gold. If it does that it has to have a market cap of $9 trillion. So we think bitcoin could price one day at $500,000 a bitcoin. So at $18,000 bitcoin, it’s a hold or if you don’t have any it’s a buy opportunity because we think there’s a 25x from here.”

Assuming Bitcoin adoption rate continues its present 2.2x per year “Moore’s Law” of growth (which it has for 10 years so far), then 30% of the world population will own Bitcoin in 4 years time.

Willy Woo, a popular on-chain analyst, believes that around 30% of the world population could own Bitcoin by 2024. It’s clear from these remarks that most analysts believe BTC has the potential to grow more within the next decade. However, the cryptocurrency market is nothing but unpredictable.

After cracking $20,000 for the first time ever, Bitcoin stands in the ‘price discovery’ mode as it faces practically no resistance to the upside. As Bitcoin has never established any level above $20,000, it’s harder to determine potential resistance points on the way up.

Additionally, Fear of Missing Out (FOMO) also makes it even more difficult for investors to figure out potential price targets. The long-term trend for Bitcoin has been extremely positive, especially after halvings. 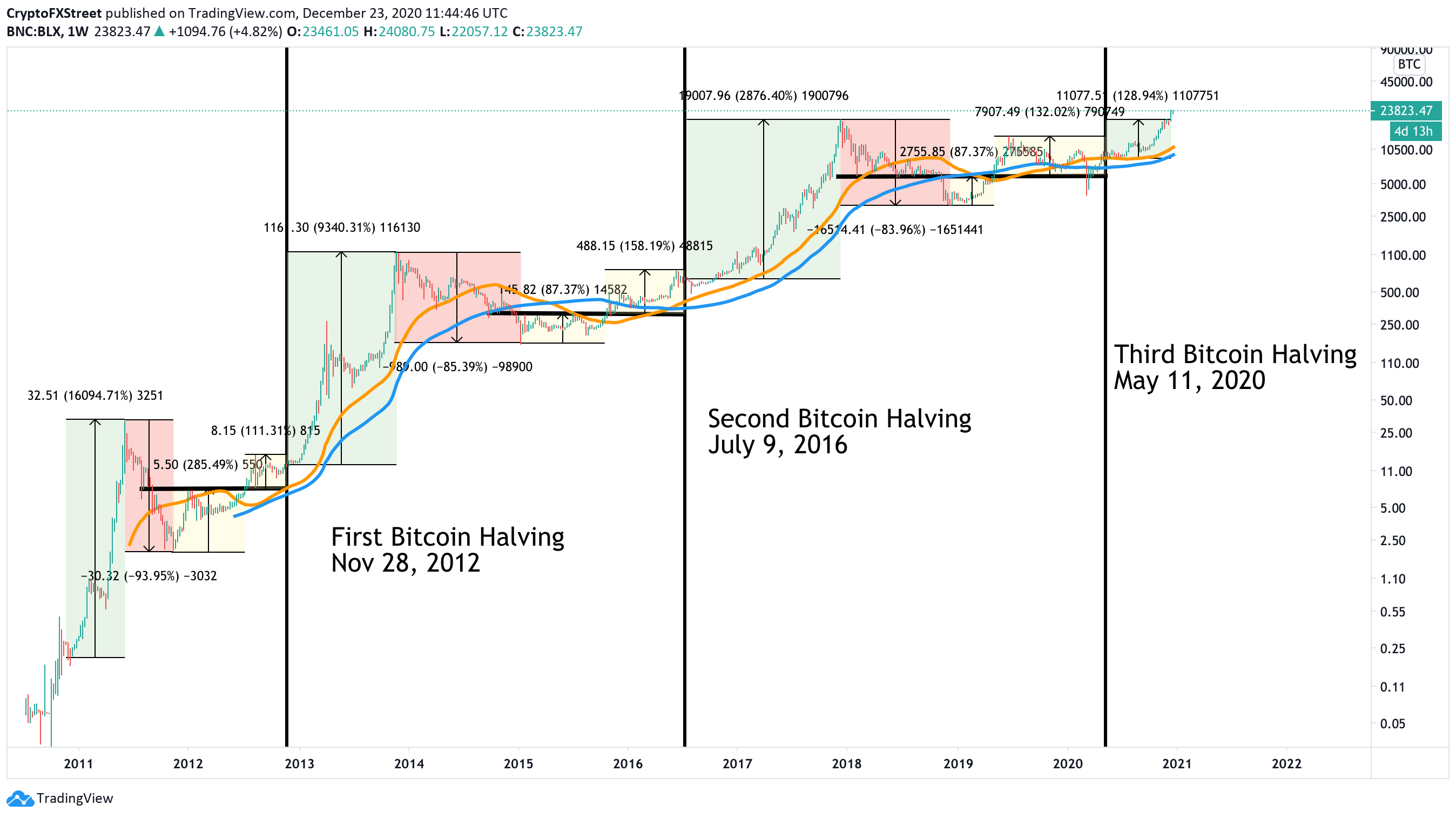 During the past two halvings, the price of Bitcoin increased by 5,500% on average, followed by a market correction into two accumulation phases. The last Bitcoin halving happened on May 11, 2020, which means we have just started the bullish phase, which could last for more than one year.

If history repeats itself, Bitcoin is most likely gearing up for a run to at least $100,000 by the end of 2021. However, it’s important to note that the market’s trading volume is higher now, which means BTC price is less likely to experience sudden crashes.

When it comes to large Bitcoin holders, Santiment shows that the number of whales holding between 1,000 and 10,000 coins increased from 2,024 at the beginning of January 2020 to 2,172 by December 2020. This represents a 7%rise in the number of large holders despite Bitcoin’s price rising throughout 2020.

This metric clearly shows that investors are interested in Bitcoin in the long term and are not willing to sell despite the digital asset’s increasing value.

Furthermore, the Bitcoin supply on exchanges dropped massively in 2020 from a peak of 5.17% of the total supply in March 2020 to a current low of 2.5%, which is less than half, indicating that most investors have moved their coins to private wallets, alleviating selling pressure.

It seems that most factors are in favor of Bitcoin for 2021, especially after the digital asset broke above $20,000. Judging by the significant adoption growth in 2020, the next year should be highly beneficial for Bitcoin and the entire cryptocurrency market.

Nenad Kerkez projects a deep correction for Bitcoin next year before another potential rally on his Camarilla Pivot Point analysis:

The pioneer of the cryptos, the BTC/USD is making new historical highs. I expect the market to drop around 25000 towards 13810 and there we might have a decision where the market will go. A move below will target 6430 and a bounce up will possibly go for 25000 again. 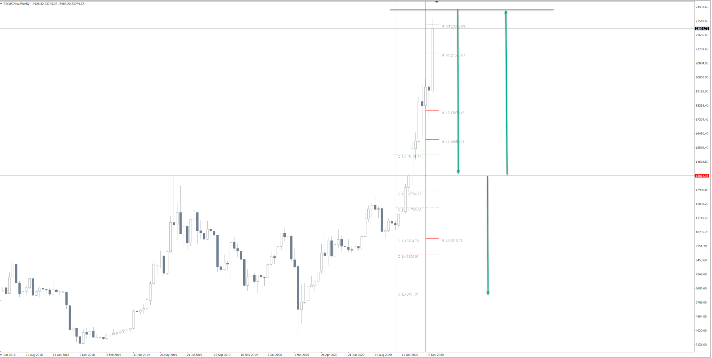 I believe that we will see a very strong year in 2021 for Bitcoin. While it’s hard to give accurate price figures and the price never moves continuously in an upward direction, the case for BTC price rising against a backdrop of a declining US dollar, a recovering economy in which investors are seeking riskier assets and continued institutional buy-in is likely to push the price to at least $50,000 and perhaps even higher.

Despite the moise, Bitcoin will struggle to be accepted as a mainstream financial asset.