China Construction Bank has partnered with a digital exchange to launch an offshore bond that relies on blockchain in a sign of rising interest in the technology from the country’s vast banking system.

The deal, which aims to raise up to $3bn in total, will allow investors to buy digital tokens that are backed by deposits at the bank’s branch in Labuan, an island tax haven in Malaysia.

The tokens will be available for purchase by ordinary investors on an exchange in the territory that specialises in digital assets and can be traded using either dollars or bitcoin.

The move comes amid a wider push towards new technologies in China’s rapidly evolving financial industry, with the central bank working on a digital version of the renminbi after a period in which online payments systems have taken off.

“China is big on blockchain and all of the big Chinese banks are majorly engaged in this area,” said Henry Chong, chief executive of Fusang Exchange, where the tokens will be traded and which uses blockchain technology to record ownership.

He said the deal would allow global investors to “benefit from access to an investment previously reserved for only the largest institutions, together with low and transparent fees”.

The deal works as a securitisation, in which investors purchase notes issued by a vehicle that deposits the proceeds at China Construction Bank Labuan (CCB Labuan). The notes, which are available as digital tokens, can be bought for as little as $100 and are backed by the underlying deposits at the bank. 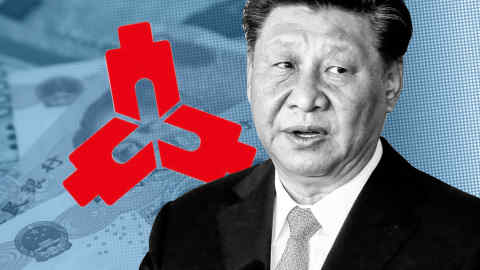 The investment provides a return of 50 basis points over Libor, an interbank benchmark commonly used to price loans and contracts, or about 0.75 per cent, which CCB Labuan and Fusang said in a joint release was “considerably higher than market interest rates for typical fixed deposits”.

They added that the bond was “the first digital security to be listed on a public stock exchange that is directly accessible by retail investors”.

Felix Feng Qi, principal officer at CCB Labuan, said the issuance “serves to narrow the divide between fintech and the wider financial markets”.

At the end of last year, Fitch Ratings said that the application of blockchain technology in Chinese securitisations “seems to have proceeded at a faster pace than in other parts of the world”.

The rating agency added that the technology “has the potential to promote data transparency and transactional efficiency”.

China Construction Bank is the sponsor and lead arranger for the deal. The tokens will begin trading on Friday.