The City of London Corporation has created the first virtual reality map of the financial district, with every building, lamp post, window and traffic light captured to within 2cm of accuracy to help planning work for the next wave of office development.

The Corporation, the governing body of much of the City financial district, said the project was the first in terms of accuracy and detail over such a large area, with mapping covering all of its 2.9 sq km.

The move comes as many of the functions of the authority have been moved to working from home, with planning committees being held online since April to comply with government guidelines.

The City of London Corporation said the digital model would allow better decision making on the Square Mile’s future, with people better able to see how different projects will look within the City ahead of decisions being made.

Alastair Moss, chair of the planning and transportation committee at the City of London Corporation, said that “working in VR gives us, as committee members, the possibility to experience proposed change to the Square Mile before making the decisions that will forever change the future of the City”.

Planning for new buildings has not stopped during the pandemic, despite worries over whether companies will need as much office space in the future given many bosses are predicting a longer term shift to working from home. In May, the City approved a building at 50 Fenchurch Street of 60,000 sq m of office space across 35 floors and 800 sq m of retail space.

The virtual reality map is a collaboration between the City of London Corporation, Innovate UK, the UK’s state-backed innovation agency, New London Architecture and VU. CITY, whose software builds a “digital twin” of the physical city.

The sort of digital twin created by the City Corporation is increasingly popular as it allows developers to play with different designs and see the outcome of decisions. 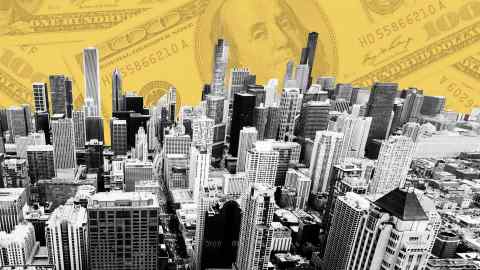 “Almost without exception, every decision made on a new building has been based on two-dimensional images and videos. Now, for the first time this new technology will give us the opportunity to put buildings into a fully interactive virtual world and experience it at a human scale,” said Mr Moss.

He said that using the technology will not be a requirement of planning permissions but he said it would be a tool that developers could use to help realise what plans offer in terms of space in the City and enhancement of the public realm.

“Most people find it difficult to read architects’ plans and to understand the impact that their proposals might have,” said Peter Murray, chairman of New London Architecture.

“This new technology allows everybody to see what buildings will look like and how they will affect the City’s streets and its skyline.”