Home
/
Bitcoin
/
What to Make of Bitcoin’s Drop

After topping a price of $58,000 this past weekend, bitcoin nosedived.

Several high-profile individuals took some shots at it.

I don’t think that bitcoin … is widely used as a transaction mechanism. To the extent it is used I fear it’s often for illicit finance.

It’s an extremely inefficient way of conducting transactions, and the amount of energy that’s consumed in processing those transactions is staggering.

It is a highly speculative asset and you know I think people should be aware it can be extremely volatile and I do worry about potential losses that investors can suffer. 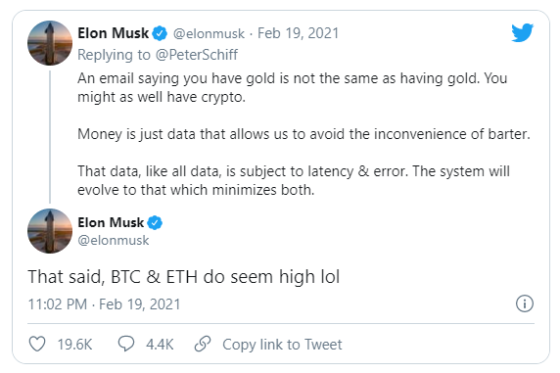 Elon has tons of money and he’s very sophisticated, so I don’t worry that his Bitcoin will sort of randomly go up or down.

I do think people get bought into these manias, who may not have as much money to spare, so I’m not bullish on Bitcoin, and my general thought would be that, if you have less money than Elon, you should probably watch out.

As I write, Elon has dropped from being the richest person in the world to being the second-richest person — great news for Jeff Bezos, who, according to Gates’ logic, now finally has enough money to invest in bitcoin!

(Sorry, Zuck, your pathetic $96.8 billion means you don’t have enough money to spare.)

***So, has bitcoin reached its zenith then?

Are the halcyon days behind, meaning investors should sell their cryptos and invest in something far safer to appease Yellen and Gates? Perhaps utility bonds or a good ‘ole annuity?

Here’s the take of Matt McCall, our crypto expert:

The best is yet to come, and we will continue to take advantage in the months and years ahead.

Today, let’s find out why Matt is as bullish as ever on the crypto universe, specifically, elite altcoins.

***No investment goes up in a straight line

For newer Digest readers, Matt is our cryptocurrency specialist. In his service, Ultimate Crypto, he recommends top-tier altcoins which he believes have the potential to make bitcoin’s gains appear relatively small.

As I write Thursday morning, Matt’s Ultimate Crypto portfolio contains 13 coins, with the average gain coming in at 634%. Again, that’s the average gain — which includes the recent pullback.

I should also note that this service debuted only 13 months ago. Every reader who joined Ultimate Crypto last January had a chance to see those gains.

Turning to Matt’s views on the recent, sudden sector decline, he contextualizes it by calling back to the stock market’s brutal selloff one year ago.

If you were in stocks one year ago at this time, you no doubt remember — perhaps with a knot in your stomach — how they began their fastest-ever descent into a bear market …

But looking back, a couple of important reminders came out of what happened …

First, no investment goes straight up.

And second, when the long-term outlook is bullish — as it is for stocks and cryptocurrencies –pullbacks, corrections, and even bear markets give you your best buying opportunities.

This brings to mind the concept of anchoring.

You’re likely familiar with the idea, but to make sure we’re all on the same page, anchoring is a behavioral bias in which various benchmarks carry a disproportionate amount of weight in our decision-making.

And with investing, anchoring can be incredibly problematic.

For example, we could anchor to the original purchase price of a bad investment, refusing to sell because we’re emotionally hitched to our entry price. We ignore fundamentals, focusing exclusively on the price we paid.

Anchoring can also lead to bad decisions even when you’re sitting on gains.

Say, you bought Acme Company at $5 per share. You got in at a great time, and in recent months, it shot up and began trading between $12 and $13 a share.

In this case, many anxious investors will anchor to these short-term losses, rather than view the overall big-picture trend.

Here’s how this looks …

Many investors anchor to a shorter-term loss … 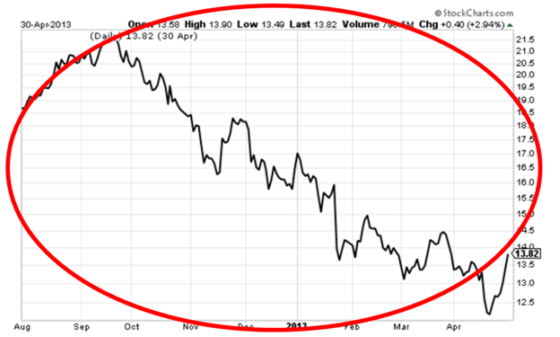 … which causes them to miss the bigger-picture trend …

(The same drop from above remains circled below) 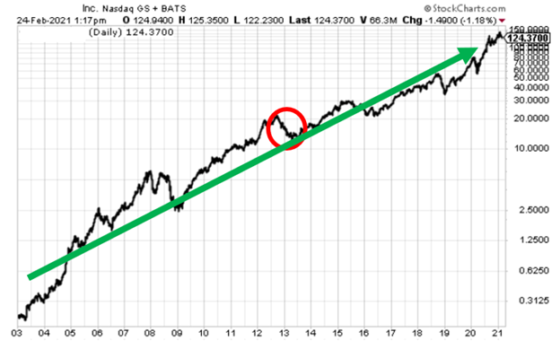 We need to stay focused on the big picture.

I know cryptos are more volatile than most investments, so the moves are more pronounced. But so is the opportunity.

If the big trend is up, that’s all that matters.

Matt notes that this same dynamic plays out with the elite altcoins he recommends.

One such altcoin we’ve highlighted here in the Digest is Chainlink. This elite altcoin is up 1,245% since Matt recommended it … but not without some massive drops along the way.

Below, look at the brutal pullback as summer turned to fall. That was a 60% plunge from almost $20 down to less than $8. 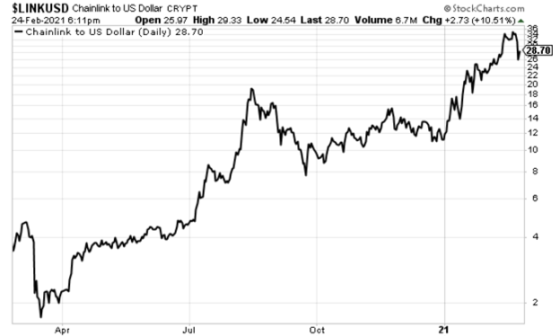 But aren’t Yellen’s comments worthy of concern? Could the government overregulate the crypto sector, crushing investors?

I frequently hear from folks who are reluctant to invest in coins because they fear the government could regulate them too heavily and limit their uses.

We’re all rightly skeptical of potentially harmful government regulation — or even the lack thereof.

(But) a government that is more knowledgeable about and open to cryptocurrencies would be a positive. Its regulations could help increase confidence in the burgeoning space.

That said, it’s critical that any regulations be smart and not stifle innovation or limit accessibility. We need regulators who understand blockchain technology and its potential to improve so many areas of our lives. We need a person in charge who has not just heard of blockchain but possesses a deep understanding of it … and its inestimable value.

Matt goes on to write that President Biden’s nomination of Gary Gensler as the next SEC chairman is a win for crypto investors.

Gensler is a professor at MIT who has taught a course on blockchain, so he clearly understands the technology and its applications.

Matt is optimistic that under Gensler, forthcoming crypto regulations will be well-thought-out and provide an environment for innovation to continue.

That would be huge. It would be another major step forward in Blockchain 2.0, and another catalyst to ignite the massive upside potential in our altcoins.

Earlier today came news that Coinbase, which is the biggest U.S. cryptocurrency exchange, moved closer to listing on the Nasdaq, as it filed to go public. The company also revealed that it had become profitable last year as bitcoin’s price surged.

Approval from the U.S. Securities and Exchange Commission for a listing would represent a landmark victory for cryptocurrency advocates, vying for mainstream endorsement for a sector which has struggled to win the trust of mainstream investors, regulators and the general public.

It would pave the way for the highest-profile share listing of a company whose business is primarily focused around the trading of cryptocurrencies, and could also be seen as a tacit regulatory approval of assets traded on its platform.

It’s just one more domino to fall as the world embraces the crypto universe.

No one can predict these shorter-term price movements.

But frankly, we don’t need to know where bitcoin will be tomorrow — so let’s not anchor to either forecast.

Instead, let’s remember where the sector started, and focus on where it’s going over the long-term. When we do that, it can help us ride out these periods of weakness.

The pullback also offers some shyer investors a new entry point. Matt has raised the buy-limit prices on several altcoins recently, including some in the new issue that came out just yesterday.

As we wrap up, I’ll give him the final word:

We must be long-term investors in altcoins.

We need to hang on through pullbacks. Not only that, you can take advantage of lower prices if you’re still building your altcoin portfolio.

It all comes back to the massive long-term potential …

We are beginning a new phase in the evolution of cryptocurrencies that my team and I call Blockchain 2.0.

Bitcoin is still the bellwether, but as it is adopted in more places and accepted around the world, the real winners of this next phase will be the hypergrowth altcoins that we’re investing in …

The bottom line in all of this is huge investor demand for both bitcoin and the entire crypto asset class.

Have a good evening,