Boris Johnson is on Friday expected to try to force Brexit trade talks to a moment of crisis, amid claims in London that Brussels is dragging its feet by insisting that future concessions must come from the British side.

David Frost, the prime minister’s chief negotiator, said he was “disappointed” with the outcome of a European Council meeting, in spite of the EU committing to continuing with talks next week.

British officials claimed the “atmospherics were not good” at the summit and that Mr Johnson would make a statement on Friday, in which he will emphasise talk of a “no-deal” end to the transition period on January 1.

Downing Street declined to say whether Mr Johnson would pull out of the talks altogether, and his allies said he was in “no hurry”, suggesting he would take time to assess the EU position.

Dominic Raab, foreign secretary, told the BBC on Friday it was important “not to raise the temperature” and that Mr Johnson would make a statement later on Friday.

But he said: “I’m surprised and disappointed at the lack of flexibility that seems to have come out of the European Council.

“We will look at this very carefully. We have always said there is a deal to be done. A deal should be able to be done.”

Tory MPs have long speculated that the prime minister would engineer some kind of political “crisis” as a prelude to making concessions to secure a deal.

Lord Frost referred to Mr Johnson’s statement on September 7 in which he said there needed to be an agreement by the European Council. If none was in place, Mr Johnson said “we should both accept that and move on”.

However, the downbeat view in Number 10 will be greeted with raised eyebrows by senior figures in both London and Brussels, where there is a growing belief that a deal is within sight.

Michel Barnier, the EU chief negotiator, on Thursday offered the UK “intensified and accelerated” Brexit talks to try to close a trade deal by early November. 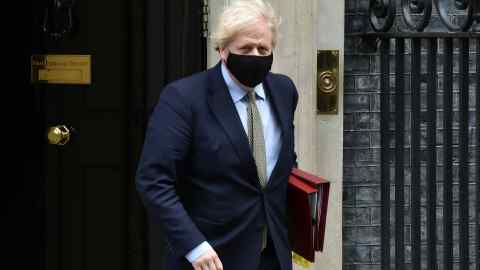 Speaking after a summit discussion of EU leaders in Brussels, Mr Barnier said his team was ready to travel to London on Monday with a view to making the most “of the two to three weeks that remain to us”.

He held out the prospect that talks could soon enter a more concentrated format — often referred to in Brussels as “the tunnel”, although Mr Barnier said he disliked the term — if landing zones came into view on the remaining sticking points. These are fishing rights, level-playing field conditions for business, and governance arrangements for the future agreement.

Lord Frost gave a tart response to the EU’s conclusions, saying he had been “surprised” by the suggestion that all future moves needed to come from the UK. “It’s an unusual approach to conducting a negotiation.”

Lord Frost seized on an EU leaders’ decision to strike from their summit conclusions the wording in earlier drafts that vowed to intensify the negotiating process.

During his press conference, Mr Barnier made it clear that the EU was eager to pursue such an intensification of talks. He even set out a tentative schedule he hoped to discuss with Lord Frost on Friday, including sessions in Brussels the week after next, after the putative London round.

The summit was EU leaders’ first in-depth discussion on Brexit this year and came as a mid-October deadline for a deal, outlined by Mr Johnson last month, elapsed.

While officials have not reported any breakthroughs following talks in recent days, there have been signs of movement on the UK side in the area of state subsidy policies.

Fishing rights stand as the most difficult obstacle to a deal, as the two sides dig in their heels over the new regime. The EU entered the future-relationship negotiations seeking to “uphold” access to British waters as well as existing catching rights for more than 70 types of fish that swim over the EU-UK maritime border.

Arriving at the summit, Emmanuel Macron, France’s president, said he was ready to accept a no-deal outcome to Brexit talks if the UK did not shift position, with negotiations still deadlocked.

However, Mr Macron at least indicated some willingness to negotiate on fish saying that he was looking for “a good compromise” on the issue, while warning that he would not allow the sector to be sacrificed.

EU leaders in their statement reaffirmed “the Union’s determination to have as close as possible a partnership with the United Kingdom”.

Angela Merkel, the German chancellor, said any deal must be a fair one, but she stressed that the current effort “is worth it”.