More than 70 British business groups representing more than 7m workers have made a last-ditch attempt to persuade politicians to return to the table next week to strike a trade deal between the EU and UK.

Organisations from across British business in automotive, aviation, chemicals, farming, pharmaceuticals, tech and financial services sectors have united to urge both sides to find a compromise over trade terms.

Bosses were alarmed by Boris Johnson’s move to end talks with EU negotiators on Friday and fear that what they see as a clear need for a deal to protect jobs and investment will be sacrificed for political motives.

The groups — ranging from the CBI, TheCityUK and techUK to the National Farmers’ Union, British Retail Consortium and the Society of Motor Manufacturers and Traders — said that securing a quick agreement “matters greatly for jobs and livelihoods”.

In a statement they said: “With compromise and tenacity, a deal can be done. Businesses call on leaders on both sides to find a route through.”

With each day that passes, business resilience is chipped away

Executives have warned that many companies are not prepared for the disruption, red tape and expense of having to trade with EU counterparts next year.

Smaller companies in particular are struggling to prepare for a no-deal outcome as they seek to survive the economic downturn caused by Covid-19.

A poll of members by the Institute of Directors this week showed that nearly a quarter of companies may not be ready for the end of the transition period. Nearly half said they were not fully prepared.

The group of trade organisations — which represents about 190,000 companies — said that an ambitious deal would have an instant impact on efforts to prepare for the end of the Brexit transition period in December.

“It will help investment by removing the threat of tariffs and quotas. And it will catalyse confidence through enhanced customs co-operation while making a precious data agreement possible, vital for services industries which make up 80 per cent of the UK economy.”

In regions and areas such as the north-east, the Humber Bank and the north-west of England, plus central Scotland and South Wales, the chemical sector is critical to the local economies

More than three-quarters of UK firms say they need a deal quickly, according to the groups.

“With each day that passes, business resilience is chipped away.”

“It is absolutely clear that it’s in nobody’s interest — and certainly not patients — to face the future with uncertainty around how medicines will be regulated, tested and moved throughout Europe and the UK,” said Richard Torbett, chief executive of the Association of the British Pharmaceutical Industry.

Paul Everitt, chief executive of ADS, warned that the UK’s aerospace, defence, space and security industries would face major disruption without a deal “through delays to cross-border trade, costly administrative requirements and a new regulatory system”.

He added: “Businesses in our sectors are facing a daily struggle to survive as a result of the Covid-19 crisis, which has put 30,000 aerospace jobs at risk.” 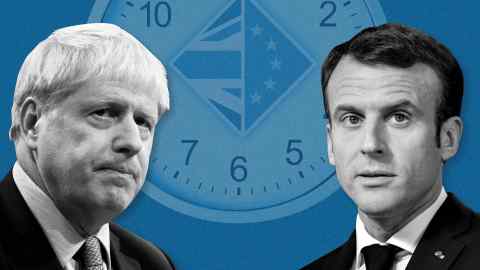 Steve Elliott, chief executive of the Chemical Industries Association, which represents businesses responsible for half a million jobs, said the industry needed a deal.

“In regions and areas such as the north-east, the Humber Bank and the north-west of England, plus central Scotland and South Wales, the chemical sector is critical to the local economies in terms of highly skilled, productive and well-rewarded jobs.”

Terry Jones, director-general of the NFU of England & Wales, said: “The EU, as a single trading bloc, is the most important international market for UK agri-food products, and given its size and proximity will continue to be so in the future. That is why it’s critically important that a tariff-free, quota-free deal is struck as soon as possible.”