The EU’s incoming financial regulation chief has warned that post-Brexit links with the City of London will inevitably be “less fluid” than now, advising companies to “urgently” prepare for changed trading conditions.

“We need to avoid being overly dependent on a third country for key financial services,” Ms McGuinness said during a confirmation hearing at the European Parliament. “We must be ready to deal with the consequences in the financial sector that flow from the UK becoming a third country.”

Her comments will disappoint some in the UK financial industry who had hoped that Ms McGuinness’s appointment would herald a more liberal attitude towards future ties with the City, not least because of Dublin’s close financial-sector links with London.

In practice, Ms McGuinness set out an agenda that emphasised continuity with existing European Commission policies. The politician, at present a member of the European Parliament, was tapped by Dublin to become the country’s new member of the EU’s executive arm after the shock resignation of former trade commissioner Phil Hogan, who was engulfed in a coronavirus lockdown scandal.

MEPs are widely expected to vote next week to approve Ms McGuinness’s nomination.

Brussels in recent months has set out a hawkish approach to future market-access arrangements between the EU and the UK in the area of financial services, which EU chief negotiator Michel Barnier has insisted must be addressed outside the scope of the two sides’ trade talks. The latest round of negotiations were due to finish on Friday. 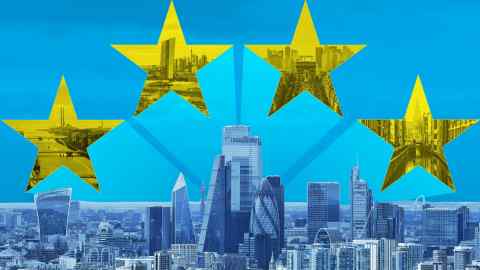 Last month, the bloc granted only temporary access rights for EU companies to UK-based clearing houses, critical institutions that manage risk in the trade system. Brussels argues that the bloc needs to build up independent capacity as part of its drive for strategic autonomy.

The EU has also ruled out granting coveted market-access rights to UK investment firms in the near-term, and EU market regulators have called for a review of the extent to which EU-domiciled investment funds should be allowed to be managed from London.

Ms McGuinness said that the EU’s policies were not about “closing ourselves off to the outside world”.

“Instead, I want to make sure that we have a strong European financial system, and that the services that underpin our financial stability are under our rules and supervision,” she said.

“Under all circumstances — deal or no deal — the trade in financial services between the EU and the UK will be different and less fluid as of 1 January next year,” she said. “All EU financial firms and stakeholders need to prepare for this. Many already have, others need to do so urgently.”

Asset shifting already under way in the industry includes the transfer to the EU of the €182bn of Irish equity and funds securities assets held in London.

Shifting the business to Euroclear in Belgium, one of the world’s largest settlement houses, is due to take place mid-March, two weeks before the expiry of a licence that allows investors to use UK-based companies.