Home
/
Brexit
/
Charles Younes: How are UK funds set to perform after the Brexit transition?

From 1 January 2021 – almost five years after the decisive referendum – the UK will finally leave the European Union and the transition period will officially come to an end. At the time of writing a deal between the two jurisdictions has yet to be struck and Chancellor Rishi Sunak’s new Financial Services Bill appears to already be setting the tone for greater divergence in the year ahead.

So, what then is the future for UK and how might Brexit affect them? By almost every measure, UK-focused funds have had a difficult 2020. Covid-19 has exacerbated the structural problems that both the FTSE 100 and FTSE 250 faced before the crisis (saturation of energy – and specifically oil – stocks and financial services companies which are cyclical in nature), while UK equities have consistently lagged the rest of the world, leading to some analysts saying the sector is behaving like an emerging market. At FE Investments we too have cut our exposure to the UK markets, partly in response to many companies slashing dividends this year, but also our risk modelling indicated fewer scenarios where the UK will perform well over the next.

The chart below shows just how far UK equities have struggled in comparison to other developed equity markets since the result in June 2016. Similarly, this year continental European equity markets have outperformed the UK market, despite their own structural political and economic issues. For comparison over the past four years, we can also compare the UK markets with the IA Global and Global Emerging Markets sectors, along with the IA North America sector, which has been one of 2020’s big winners. The chart below demonstrates more starkly the gulf in performance. 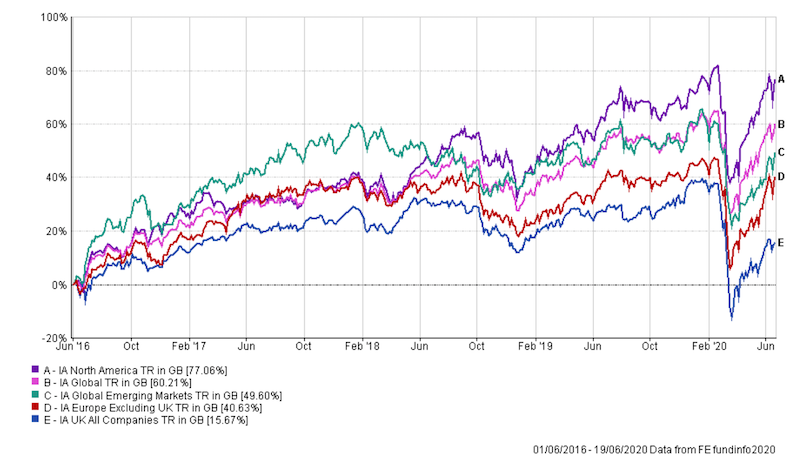 The same story can be seen at fund level as well. Among the best performers from the European sector, Baillie Gifford – European which is 5-Crown Rated by FE Investments, has returned 33.88% year to date, having invested in internet giants such as Prosus and e-commerce platforms like Zalando. Similarly, L&G European Trust is invested in digital businesses and tech stocks – the big winners during lockdown – returned an impressive 28.32% to date. It has been a general trend this year, that in order to beat their benchmarks, active managers need to be positioned in disrupting technology stocks, which was the case for the Baillie Gifford fund.

As the chart below shows, even the best performing UK funds, CFP SDL Free Spirit (which invests in technology disrupters too) and MI Chelverton UK Equity Growth, while generating positive returns, fell significantly shorter than their European counterparts. 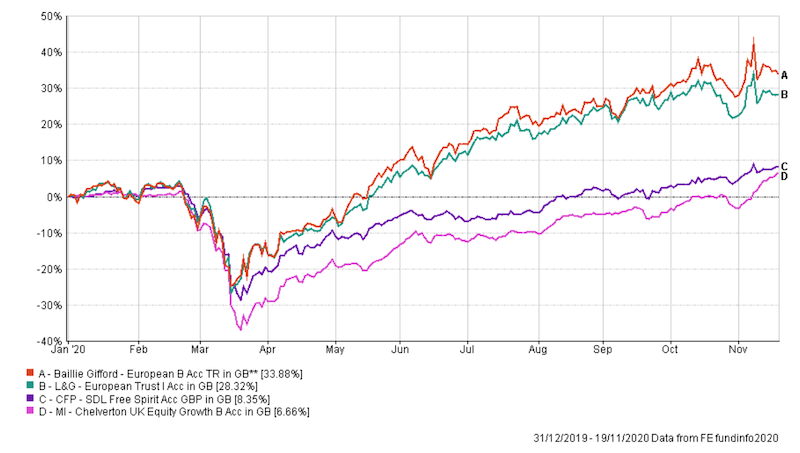 Beyond 2020, the uncertainty caused by Brexit has been a large driver of UK underperformance in recent years. In the immediate aftermath of the vote, the value of sterling collapsed in comparison to the euro making UK funds and assets less attractive for investors. It is fairly clear that in the months ahead we can expect more turbulence in the markets and further investor reticence as trade negotiations linger and co-operation between the two jurisdictions declining.

While the picture perhaps looks a little bleak for UK-focused funds, the one thing that 2020 has taught us is that markets are fickle. Already we are seeing that sterling rates are improving, with cash and bond return levels moved a corresponding amount in the same direction. As a sign of just how fickle the markets can be, we have seen the correlation between sterling rates and the UK equity market reversing over the past year. Prior to 2020, any bad news for the UK economy was reflected with a significant drop in sterling, which was good news for the multinationals listed in London. This relationship has reversed in the past 12 months, so now we are seeing the UK equity market and currency rates moving in the same direction, which although essentially bad news for the economy, is good news for most domestic-focused companies which have been trading at significant discount since 2016. Rising rates, it is said, tend to raise all funds.

Additionally, we have seen the impact that the news of positive vaccine tests has had on global markets and with the Oxford team similarly making great strides in the fight against coronavirus, those (significant amount of) UK funds with investments in life sciences and medical research stocks stand to benefit considerably. A year from now, market conditions for both the EU and the UK may have changed beyond recognition.

Charles Younes is a research manager at FE Investments