In 36 years working in one of Ireland’s busiest hospitals, Ann Noonan has nursed a countless number of seriously ill patients. But she has never witnessed anything so “indiscriminate” as coronavirus — as a new wave rips through the country.

“I don’t think I’ve ever experienced anything like this before and talking to my colleagues they haven’t either,” said Ms Noonan, a nurse at University Hospital Limerick and a senior official with the INMO trade union.

“The healthiest of people can be the people who are affected most. That’s what I find alarming.”

As coronavirus cases have surged across much of Europe, Ireland has felt the full force of the new wave. Rampant infections since Christmas forced Micheál Martin’s government into a series of drastic lockdown measures that have closed schools, construction, hospitality and retail, leaving tens of thousands jobless again.

But those restrictions introduced around the festive period came too late to avert the surge that has put massive strain on hospitals, with intensive care wards filling up and 10 per cent of frontline health staff off work because of infection or close contact.

Soaring infections have set off a “day-by-day and an hour-by-hour” battle to contain the virus, said Paul Reid, chief of Ireland’s Health Service Executive, which runs the country’s public healthcare system. “It’s quite grim at the moment in terms of what we’re experiencing and we know it’s continuing to get worse.”

Ms Noonan, who tested negative this week just days after receiving her first vaccine dose, said she knew of teams of six or seven nurses in which two have Covid-19. “It’s totally decimated our staff” she said.

We have the same fears everyone else has. We’re just immersed in the virus.

Mr Martin has acknowledged that the situation was “extremely serious” but the winter surge has outpaced even the most pessimistic forecasts.

No one in government expected that Ireland, which avoided the worst of the first wave last spring and coped well in the autumn, would now rank among the worst hit in Europe. “We knew the numbers were going to go up after Christmas but not to the extent they did,” said an ally of the Taoiseach.

Ireland on Friday reported 73,026 infections in the two weeks to January 14, equivalent to 44 per cent of all coronavirus cases since the pandemic struck the country. The day before a senior health official said one person in every 67 people in Ireland had tested positive in the previous fortnight.

The incidence per 100,000 population in that 14-day period was 1,533 — up from just 166 on December 23. Last week Ireland had the second highest rate behind only the Czech Republic, according to European Centre for Disease Prevention and Control data for 30 countries.

The highly transmissible Covid-19 variant first detected in the UK arrived in Ireland just before Christmas. The strain now accounts for an ever-increasing proportion of cases and was found in some 45 per cent of the most recent samples. Yet experts believe the Irish Covid-19 surge was fuelled by the Christmas festivities, when people were warned to avoid large gatherings even as draconian social restrictions were temporarily eased.

“You don’t need to be an epidemiologist, it’s obvious why this happened,” said Luke O’Neill, immunologist at Trinity College Dublin.

“The Irish love Christmas and didn’t comply with the guidelines. Household gatherings, lots of parties — it’s such a contagious virus. Even if you had three households mixing together, that would affect the spread.”

There have been some positive signs. Reported infections have fallen in recent days, totalling 3,498 on Friday compared with a record 8,248 on the same day last week. The rate of positive tests has also dropped. Health officials expect pressure on hospitals to peak in the next week. 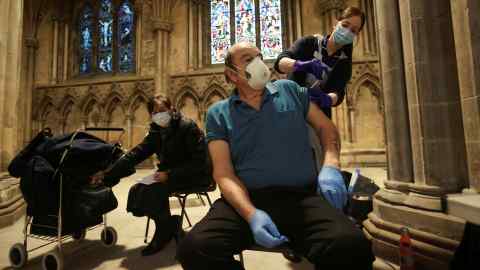 Dublin has also trained more than 4,000 vaccinators as part of a drive to complete 700,000 inoculations by the end of March. But only 77,300 people in a country of 4.77m had received the jab by Thursday, with officials recording many of the vaccinations using pen and paper.

IT problems have led to claims in parliament that Ireland is “combining 21st century cutting-edge vaccine medicine with a 13th century means of recording it”. The government insists new computer systems would be ready to roll out next month.

The surge has put on hold the prospects of an early economic rebound. Almost 400,000 workers claimed special Covid-19 unemployment benefits this week and a further 220,000 are on government wage subsidies. Paschal Donohoe, Ireland’s finance minister, said the current restrictions would likely continue “in their current way” through February and March.

Brexit woes since the UK officially left the EU on December 31 have only added to the strain. The Freight Transport Association of Ireland warned Mr Martin this week that new red tape was putting low-margin traders under unsustainable pressure.

“There is a growing backlog of goods of all hues, from mechanical parts (car parts) to electrical household goods, furniture, clothing, food supplies sitting in depots,” the body said.

Ms Noonan, the Limerick nurse, admitted that “normal life” was on hold as Ireland struggled against the virus. “I don’t meet anyone. I go to work, I go to the shop and I come home,” she said.

“We have the same fears everyone else has. We’re just immersed in the virus.”