The former minister leading the UK government’s review into the City has warned that Brussels is targeting London’s position as a global financial services centre and has predicted the EU will not grant British-based firms the highly prized access they are seeking to the European market.

Jonathan Hill, also a former EU financial services commissioner, said it was not in Brussels’ interests to allow London to continue to dominate the European financial market in the way it did before Brexit.

“Given that their strategy is to build up the EU, why on earth would they?” said Lord Hill, who is drawing up a series of reforms to the City’s stock market listings regime aimed at attracting more fast-growth and founder-led tech businesses. “The EU will not do us any favours.”

The EU and UK have agreed that following Britain’s departure from the single market on January 1, decisions on access to each others’ markets in financial services will be based on each side declaring unilaterally that the other side’s regulatory systems are “equivalent” to its own.

So far Brussels has granted the UK time-limited equivalence on two of the roughly 40 different financial areas where London is seeking market access. The EU has given no further indication on when it will take more equivalence decisions.

Despite this, Lord Hill said Britain had an advantage outside the EU in being able to move more quickly when regulating to attract the next wave of companies in growing industries such as digital, fintech and green finance.

“We should be able to do this quicker, more proportionately, more flexibly, than you can at EU27,” he insisted.

He added that it was “striking” that London was still dominant in the region even after “four and a half years of political paralysis”, pointing out that no single European city had been able to capitalise on Brexit.

“The hopes my old European mates had that this would lead to the re-emergence of a European capital markets centre to compete with London has not happened,” he said. Lord Hill stood down from the European Commission in 2016 following the Brexit referendum.

“The bits of business that have left London have fragmented across Europe: to Amsterdam, Brussels, Frankfurt, Paris, Dublin. That says our competition is American and Asia so let’s see what they are doing.”

Brexit should be used as a chance for the UK to position itself for the future, he said. “There is a necessity to think about London’s position as a global financial centre after Brexit. We need to signal that things are changing.”

He said that the review into the stock market listings regime — which will be published next month — would be part of a broader look at whether the City of London was competitive with global financial centres in the US and Asia.

“We should use this review as an opportunity to look at some of the broader questions: how could we improve the whole ecosystem, build strong and deeper capital markets? . . . how can we make the whole system work better?”

Lord Hill has consulted widely with industry. People involved in the consultation said the review was likely to back the reduction in the requirement for free float and allow founders to have greater control of their businesses through a dual class of shares. Both measures are seen to be attractive to the sorts of fast-growing tech companies that London wants, and are already offered by exchanges elsewhere. 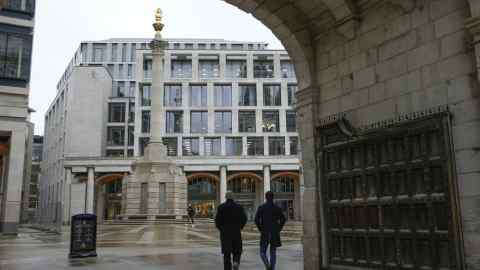 Lord Hill declined to say what the review would conclude, but added that the “key point is that we need to attract the growth businesses of the future and they are operating in a global market where there is a lot of competition for them”.

By ensuring that the UK does not “miss out on this moment of tech companies setting up, looking to grow”, this would lead to an “ecosystem” of better research and access to capital.

He warned against any knee-jerk “bonfire of red tape” but said it was crucial that the UK moved fast to deliver reforms, pointing at data showing that London was losing out to the US and Asia for the biggest and most exciting IPOs.

Asked about areas such as dual share classes and free floats, he said: “You can see that other global high-standard jurisdictions think about them slightly differently than we think about them in the UK. If one does recommend changes then it’s how one can put safeguards in, phase them in and balance interests.”