Brussels is set to warn that global markets are too reliant on the dollar as it seeks ways of curbing Europe’s vulnerability to US sanctions and other financial risks, in a challenge to the currency’s supremacy just days before Joe Biden’s inauguration as president.

A draft European Commission policy paper seen by the Financial Times reveals the depth of EU frustration after four years of the administration of Donald Trump, whose policies underscored the dominance of the US and its currency in the global financial system.

In particular, the paper highlights the EU’s difficulties in asserting its independence in the face of sanctions against Iran imposed by Mr Trump, citing them as proof of the need to “shield” the bloc from “the effects of unlawful extraterritorial application” of such measures.

“The Trump years highlighted our vulnerabilities, and we need to address those even if he’s gone,” said a commission official. “It’s about the EU’s place in the world — having the means to be an economic and financial power commensurate with our size.”

Mr Trump’s Iran strategy had a direct impact on financial infrastructure based in Europe, such as the Swift payment messaging system and the Euroclear and Clearstream securities depositories.

The Trump years highlighted our vulnerabilities, and we need to address those even if he’s gone

Washington’s Iran sanctions meant Brussels had to set up a special-purpose vehicle to facilitate payments for legitimate trade between the EU and the Islamic republic — a process fraught with difficulty.

“The EU should develop measures to shield EU operators in the event a third country compels EU-based financial-market infrastructures to comply with its unilaterally adopted sanctions,” the paper says.

The document underscores the EU’s ambition to bolster its self-reliance in a range of sectors, including finance, after the Trump administration ripped up transatlantic norms. But it is set to be adopted by the EU commission on the eve of Joe Biden being sworn in as US president on Wednesday, and as the EU pledges to seek a new era of co-operation with Washington after the acrimony of the Trump years.

Other plans in the paper that are aimed at boosting the bloc’s strategic autonomy include tighter policing of foreign takeovers using the EU’s new system for screening foreign direct investment.

Proposed takeovers should be vetted to see if they “would render the EU target company more prone to abide by such extraterritorial sanctions”, the document says, on the basis that the acquisitions could then be blocked on national security grounds.

According to the draft, the EU also needs to find ways of boosting the role of the euro in light of lessons learnt from the Covid-19 pandemic. The paper warns that “global financial markets are too reliant on the US dollar to cushion financial tensions and stability risks”. 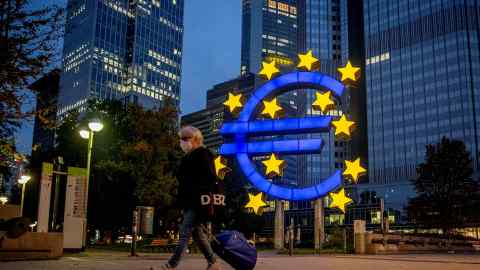 EU officials cautioned that the draft could be revised before the text is adopted by the European Commission on Tuesday.

The bloc has long sought to promote greater use of the euro, for example in commodity contracts, to bolster its financial and economic autonomy.

Specific steps set out in the paper include using a planned review of EU regulation of financial benchmarks to encourage them to be denominated in euros. Most are based on dollars.

Policymakers want to find energy alternatives to crude oil, where the main benchmarks such as Brent and WTI are tied to the dollar. The paper cited gas, where a euro-based contract traded in Amsterdam is fast emerging, and hydrogen as markets where the euro’s role should be developed.

Brussels believes a stronger global role for the euro would “shield the economy from foreign exchange shocks and reduce reliance on other currencies”.

“It would also help achieve globally shared goals such as the resilience of the international monetary system, a more stable and diversified global currency system, and a broader choice for market operators, all making the global economy less vulnerable,” the paper says.

The commission is also concerned that the bloc has become increasingly reliant on non-EU investment banks that “in times of financial crisis . . . may choose to reduce their presence in the EU and to focus on their domestic market”.

Other parts of the paper reiterate the EU’s ambitions to be more independent of UK financial-market infrastructure after Brexit — notably UK-based clearinghouses.