Brexit and the coronavirus pandemic have reinforced the need to solidify the single currency’s foundations, said the president of the Eurogroup of finance ministers, who will seek to revive the bloc’s long-stalled banking union project this week.

Paschal Donohoe, who is also the Irish finance minister, told the Financial Times he would seek to intensify work in four key areas — including divisive plans to create a eurozone-wide bank deposit insurance (EDIS) — as he prepares for a summit of eurozone leaders on Friday.

The package would also include improving the region’s crisis management framework, cross-market integration and tackling the link between banks and their country’s sovereign debt, said Mr Donohoe, who is aiming for a new detailed banking union work plan in the middle of next year.

“There is a renewed responsibility on those within the eurogroup to look at how we can deepen the foundations of the euro and deepen the economic architecture of the euro,” given the economic toll from Covid-19, Mr Donohoe said in an interview. Brexit is a reminder that the euro area and EU need “resilient sources of employment and income growth”, he added.

Eurozone finance ministers last week reached a political agreement on a long-awaited reform to the bloc’s bailout fund, the European Stability Mechanism, removing a barrier that has held back work on banking union project. An attempt late last year by German finance minister Olaf Scholz to end the “continuous gridlock” over the issue foundered after it was overtaken by the Covid-19 crisis. 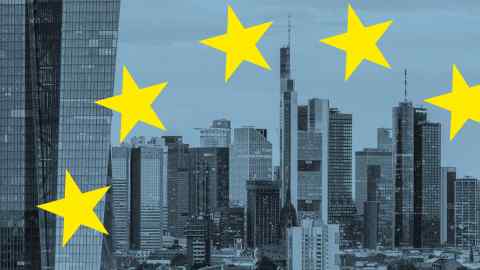 Mr Scholz’s set of proposals opened the door to the creation of common deposit insurance for eurozone banks — something that has long been resisted by richer northern eurozone countries who fear their taxpayers would be on the hook for bank failures in other parts of Europe. But sealing a banking union deal will require efforts by multiple governments across the euro area, including unpalatable reforms.

Mr Donohoe said the eurogroup had yet to reach an agreement on how to progress with EDIS, acknowledging “heightened concern” of some capitals about greater risk-sharing. But he said the task now was about “building momentum through constant political contact and dialogue”.

“There is a broad understanding in the eurogroup that we need to have the strongest foundations possible for the euro in the coming years,” he said.

This will also entail detailed work on tackling the nexus between banks and their country’s sovereign debt — a so-called doom loop that has long bedevilled the European banking system. The key priorities also include examining how to handle the liquidity needs of a failing bank and ensuring better co-ordination between home and host bank supervisors, bolstering cross-border integration.

The onset of the pandemic has forced Brussels to suspend temporarily the bloc’s fiscal rules as governments turn to fiscal firepower to support beleaguered companies and support employment. Mr Donohoe said that despite the rollout of Covid-19 vaccine in the EU in the coming weeks and months, it was “too early to say what meaningful impact it will have on policy choices in 2021”.

He encouraged governments to continue to support their economies even if growth rates rebounded next year.

“We need to be careful that we don’t assume that higher growth is the same as inclusive growth,” he said. “We have huge employment issues, huge income issues, within the EU as a result of the impact of Covid-19.”