The UK “is a buy” say economists at Goldman Sachs who see a free-trade deal being signed between the EU and UK around about the time of the December 10-11 European Council meeting, a development that could unlock gains in Pound Sterling and UK-focussed stocks.

Furthermore, news that the UK has become the first country in the world to approve the Pfizer/BioNtech covid-19 vaccine should provide an additional outperformance boost to the economy, and its currency say analysts at the Wall Street-based bank.

“While the UK-EU trade talks have taken longer than originally planned, our economists continue to expect a ‘thin’ free trade agreement in goods; the EU Council meeting on 10-11 December looks like an achievable goal to see a final agreement, in our view,” says Sharon Bell, a strategist with Goldman Sachs in London.

This week had been widely billed as the week within which a deal would finally be sealed by negotiators, but Ireland’s Deputy Prime Minister Leo Varadkar on Tuesday said talks could go on for a “couple of weeks”.

The statement betrays a reality of these negotiations; that they will go ‘to the wire’ and the EU Council meeting appears to be a final chance for EU leaders to fight out a final compromise and agree to a deal.

Indeed media reports out overnight say EU leaders will want to see a Chief Negotiator Michel Barnier’s deal before it is agreed – perhaps the clearest signal yet that the EU summit is the deadline. 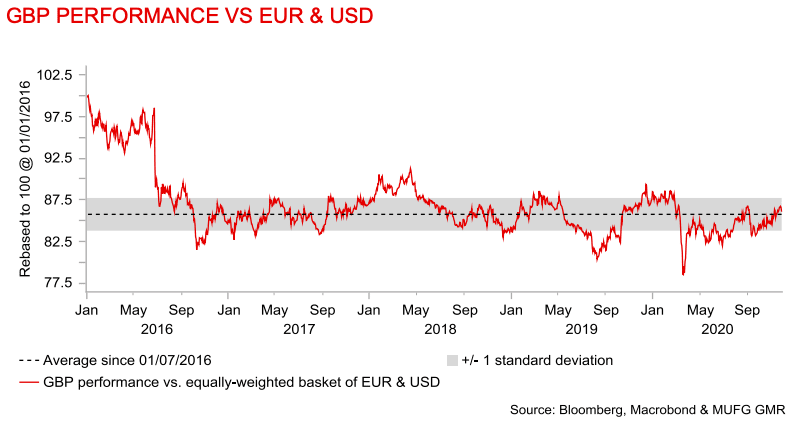 Above: GBP’s value against the EUR and USD. Image courtesy of MUFG

Further gains for Sterling are possible say economists at Goldman Sachs who see a Brexit trade deal as aiding a “strong economic turn” for the country.

Goldman Sachs economists see “substantial” room for an economic rebound in 2021, as activity still remains depressed and the UK is well positioned with regard to vaccine distribution.

It was reported on Wednesday that the UK’s health authorities have approved the Pfizer/BioNtech vaccine, which should allow for vaccinations to begin within days.

The MHRA said the vaccine which offers up to 95% protection against Covid-19 illness is safe for roll out next week.

Immunisations could start within days for people in high priority groups reports the BBC.

The UK has already ordered 40m doses, enough to vaccinate 20m people, with two shots each.

U.S. medical authorities will consider the same vaccine on December 10 with the Moderna candidate due for review on December 17.

Analysts at the Wall Street-based investment bank expect widespread vaccination from Covid-19 to be underway across Europe in the first quarter of 2021, with a large share of the population vaccinated by the end of the second quarter.

This is a quarter earlier than economists had previously expected.

Goldman Sachs look for UK growth of 7% in 2021 and 6.2% in 2022, which is significantly above the consensus estimates of the institutional analyst community.

These developments are in turn expected to support the British Pound.

Based on a ‘thin’ trade deal and tailwinds from cyclical optimism and vaccine distribution, Goldman Sachs foreign exchange strategists expect Sterling to maintain an upward trend.

They continue to recommend going ‘short’ EUR/GBP with a target of 0.87, which amounts to about 3.0% upside against the Euro from current levels. EUR/GBP at 0.87 gives a Pound-to-Euro exchange rate of 1.15.

Analysts also expect broad dollar weakness next year together with domestic economic improvement, driving GBP/USD to 1.44 in 12m (which is a gain of about 8%).

Domestic stocks are also poised to benefit from an improved domestic story as they are the most sensitive slice of the market to Sterling, along with FTSE 250, which has about 50/50 domestic and non-domestic sales.

Bell says UK homebuilders and domestic banks are also sensitive FX moves and would benefit from a growth improvement next year.

But economists at Bank of America have told their clients the UK economy is set to face headwinds over coming months and years as the impact of Brexit bites down on economic performance.

“We are we are not obsessing about whether there will be a deal as the market currently seems to be. Our focus is on 2021, not on the hope that a deal somehow marks the end of the Brexit saga. Brexit truly begins in 2021 and the implementation risks are real,” says Kamal Sharma, an economist at Bank of America in London.

Sharma says the Pound will be judged on the health of the economy in a post-EU environment.

“Add to the mix a deteriorating domestic political backdrop as governance concerns mount, we see little reason to think that GBP will do anything else but struggle in the coming years,” adds Sharma.

Analysis from Deutsche Bank shows that a Brexit trade shock could knock off at least 0.6pp from annual GDP, even with a deal.

“The UK will face its worst trade shock in history via Brexit on 1 January 2021,” says Sanjay Raja, Economist at Deutsche Bank.

Deutsche Bank say the combination of scarring effects from the pandemic as well as Brexit will act as a material drag to the medium-term outlook.

“We continue to expect the UK’s recovery to be a protracted one, with output only returning to its pre-pandemic levels around 2024,” says Raja. 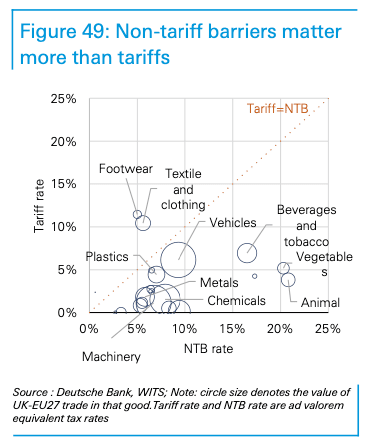 “Put simply, with the UK leaving the single market and customs union, importers and exporters will face tariffs (in a no-deal scenario) and non-tariff barriers (in both a deal and a no-deal Brexit). This should increase the cost of trade with the EU,” says Raja.

The analyst says that for Brexit to be a success, the UK will need to look both inward and outward, ramping up structural reform via fiscal policy to deliver on its productivity targets while striking new trade deals to claw back some of the reduction in trade capacity.

Invest in Spanish Property. A selection of discounted properties due to the covid-19 crisis, online viewings and transactions possible. Download the Guide