ALEX BRUMMER: As the UK emerges from the coronavirus nightmare, there is a golden chance to embrace new horizons

This was the week when some of the biggest voices in UK business really went public on the opportunities for global Britain.

Yes, the European Union has not helped itself with its vaccine meltdown. But Britain cannot escape its close geography, trade and financial relations with the EU.

They are going to be as critical as ever for prosperity when we come out of lockdown. 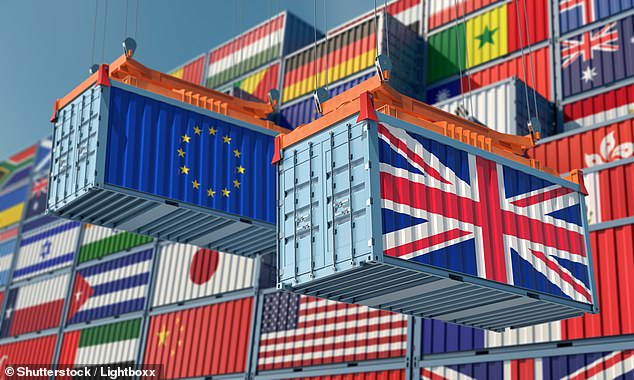 Trading places: The value of being outside the EU is rebooting the corporate and Whitehall agenda

So we have a national interest in seeing the EU overcome its immunisation roadblocks, even if the only goal is a villa vacation in Tuscany or on a Greek island this summer.

The value of being outside the EU, however, is rebooting the corporate and Whitehall agenda. After nearly half a century of intense focus on Europe, government and commerce are lifting their eyes.

International Trade Secretary Liz Truss is on ‘essential’ travel to India to try to effect a new investment agreement between the two countries on route to a free trade deal.

That means ironing out older problems, including the release of nearly £900m of cash due to investors in London-quoted Cairn Energy, which has been tied up in a lengthy arbitration dispute.

India was among countries cited by Unilever chief executive Alan Jope when he laid out his three- to five-year plan for achieving higher growth for Britain’s nutritious food and health and hygiene leader.

The now fully British-based Anglo-Dutch company sees India (where it has a quoted subsidiary), China and North America as big opportunities.

If it would speed things up, Jope is prepared to use the group’s currency, Unilever shares, to make a transformational deal.

It could do worse than think about all or part of GSK’s high-performing consumer healthcare arm – jointly owned with Pfizer – which is due to be spun off within the next two years.

Throughout the long transition to leaving the EU, we have heard endless whinging from City groups which should know better about how London risks losing out to Frankfurt, Paris and elsewhere.

The movement of some £5billion of trade in euro-denominated stocks to the Continent was seen as evidence.

It could also be an act of self-harm because the Balkanisation of dealings will raise costs to buyers and sellers.

It also goes without saying that for all the fire and brimstone in the Commons, HSBC is not about to abandon Hong Kong, China and Asia, which is its primary profits gusher and competitive advantage over other international banks.

Recognition of how the City is lifting its sights has come from two Wall Street veterans now at the heart of the Square Mile.

In an interview with this paper, the London Stock Exchange chief executive David Schwimmer was unapologetic about how completion of the £20bn deal with Refinitiv will make big differences to the LSE’s global reach with foreign exchange and bond dealing platforms in Asia and North America.

Schwimmer is also pushing hard for changes in UK share listing rules so that it can better compete with New York in attracting tech public offerings to London. The demand for stock and the premiums achieved by The Hut Group, Moonpig and Dr Martens in recent times has demonstrated there is no shortage of liquidity or desire for new issues in the City, in spite of a perceived London discount.

He has been joined in the global chorus by Barclays boss Jes Staley. In a BBC interview the former JP Morgan investment banker turned Barclays chief executive was unequivocal.

The question I am most asked as a Brexit advocate is why couldn’t we have gone global from within the EU as easily as we can outside? Staley, in many ways, answers that question. Politicians, regulators, companies and investors found it hard to lift their eyes beyond the EU.

Those financial firms who did see the future elsewhere, such as the Prudential, added enormous value by re-orientating from Europe to Asia.

Manufacturers including Dyson have seen Singapore as the best place, outside its Malmesbury home, to expand. The hero of the pandemic, Astrazeneca, earns 21 per cent of its revenues in China.

As the UK emerges from the Covid nightmare, there is a golden chance to embrace the new horizons.