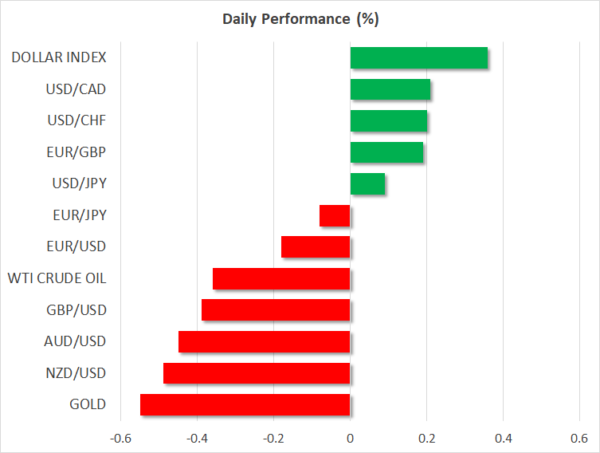 Markets subdued as virus surge shows no sign of easing

Vaccine optimism struggled to sustain the positive risk sentiment as investors found it hard to ignore the ever-worrying headlines about exploding infection and hospitalization rates in Europe and America.


The death toll in the United States from COVID-19 has now surpassed 250,000, but what really shook Wall Street on Wednesday was news from closer to home. New York City announced the closure of all public schools after the city’s positivity rate from virus tests reached a seven-day average of 3% – the threshold set to keep schools open.

Other states, counties and cities across America also tightened their virus curbs as infections increase uncontrollably, showing no sign of plateauing and overwhelming health services.

However, that wasn’t enough to ease concerns about the huge uncertainty over the near-term outlook and shares on Wall Street closed lower for a second straight day. E-mini futures for the Dow Jones Industrial and S&P 500 hovered between negative and positive territory, but the Nasdaq Composite was set for losses of about 0.6% at today’s open.

Vaccine news getting better and better

The Nasdaq continues to lag its peers as the positive vaccine headlines have injected some life into traditional stocks such as airlines, which got an additional boost yesterday after Boeing was given the go-ahead to resume flights of its troubled 737 MAX jets.

Old economy stocks are likely to stay under the spotlight as long as the encouraging vaccine news keep flowing. Pfizer/BioNTech said final analysis showed their vaccine was 95% effective, even higher than the previous estimate, while the AstraZeneca/Oxford vaccine was also found to show a strong immune response according to the latest findings by researchers.

However, full celebrations may have to wait until after the winter virus storm has passed as there’s growing doubts about how well Europe and America will cope with the pandemic over the next few months. In particular, investors will be keeping an eye on whether the restrictions will be lifted in time for Christmas, which is a crucial period for many retailers.

For now, though, the gloomy outlook weighed on European shares, which opened down by about 1%, and the safe-haven US dollar and yen edged higher. The greenback jumped 0.3% against a basket of currencies, pulling away from yesterday’s one-week lows. Gold failed to benefit from the risk-off flows as it slid for a third session.

The euro retreated after it was unable to overcome resistance in the $1.1890 region as worries that the latest EU row over the bloc’s budget and recovery fund may not be resolved easily dragged the currency lower. Hungary and Poland are refusing to back down on their veto of the EU’s spending plans as they are opposed to the eligibility for the rescue fund being made conditional to respecting the rule of law. So far, the euro’s reactions has been fairly muted to the possibility of the EU’s fiscal package being delayed, but a major escalation in the dispute could pose a significant downside risk for the single currency.

The pound was also under pressure on Thursday on reports that EU leaders want to step-up preparations for a no-deal Brexit amid fears that time is fast running out for an agreement to be reached.

Looking ahead to the rest of the day, the weekly jobless claims figures out of the US will be watched for clues as to whether the worsening virus situation is starting to affect the labour market.