US stocks closed higher after a choppy trading day, as investors weighed up the prospects of a new relief package for the pandemic-scarred US economy.

The S&P 500 index rose 0.5 per cent, despite turning negative at one point during the session. The tech-focused Nasdaq Composite climbed by a larger magnitude, gaining 1.4 per cent.

In recent days Nancy Pelosi, speaker of the House of Representatives, and Treasury secretary Steven Mnuchin, have sought to work out the details of another round of stimulus measures, which investors and the Federal Reserve see as key to keeping the recovery in the world’s largest economy from losing momentum.

But many observers have expressed doubts about a compromise being reached soon, especially given that progress appeared to stall on Thursday. In a recent note, analysts at Goldman Sachs said “the odds still seem stacked against additional pre-election fiscal stimulus”.

Earlier on Thursday Ms Pelosi said she was “hopeful” an agreement could be reached, but acknowledged that “it takes money to do that”. Subsequent comments in a Bloomberg Television interview underscored how far apart both sides remain.

“This isn’t half a loaf. What they’re offering is the heel of the loaf,” she said. “It’s no use going into a negotiation just saying you’ll take the path of least resistance.”

Meanwhile, Brent crude dropped more than 5 per cent at one point to slip below $40 a barrel, hitting a low of $39.95, before edging higher again. Brent has lost more than 10 per cent in the past month after the recovery under way since May stalled.

The return of supplies from Libya has also led traders to warn Opec may need to slow plans to start returning more production to the market as supply starts to again outstrip consumption.

The price of copper, seen as an economic bellwether, fell 5 per cent as a rise in stocks of the metal on the London Metal Exchange weighed down on the market. The price hit its lowest level in more than a month at $6,408 a tonne. China, the world’s largest copper consumer, was closed for a holiday, adding to the volatility in prices.

In currencies sterling edged lower against the dollar after the European Commission announced legal action against the UK, compromising last-ditch trade talks between Brussels and London. 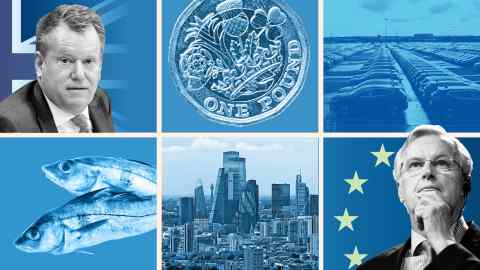 Colin McLean, managing director of Edinburgh-based SVM Asset Management, described sterling as “friendless” and said there was still “not much incentive to own it”, citing prospects of a disorderly Brexit and the possibility the Bank of England could adopt negative interest rates, an issue on which the UK central bank has kept markets guessing.

But Ian Tew, a sterling trader at Barclays, said the EU’s “internal market bill legal action was expected”, explaining the intraday swings came because “sterling is very sensitive to Brexit headlines as the deadline approaches”.