Paul Volcker will be remembered, first and foremost, as the central banker who vanquished the inflation of the 1970s, positioning the US for decades of prosperity.

Close to a decade after it was enacted as part of the Dodd-Frank reform law, regulators continue to tinker with the rule, amid claims it has been too complicated and that many of its aims have been achieved by other means.

“The rules were very complicated and didn’t really need to be, given the [Dodd-Frank] statute,” said Jai Massari, an attorney at Davis Polk who advises financial institutions about regulation.

She said the details of the Volcker rule could be simplified, particularly given other financial reforms that have been implemented. “Putting in a lot of compliance infrastructure was good, but maybe [the rule] didn’t do as much work as the capital, liquidity, and resolution rules. Some right-sizing makes sense here.”

Bankers chafed at the rule, saying legitimate banking activity got caught up in the ban on proprietary trading. Regulators appointed by the Trump administration responded and the core prop trading provision was cut back this summer, making more trades types exempt from the rule.

Bankers know what proprietary trading is and is not. Don’t let them tell you any different

Now regulators are considering a similar change to the “covered funds” provision, which prevents banks from participating in prop trading though ownership in investment funds and from taking risk in the investment funds they offer to clients.

A central aim of the covered funds provision was to prevent banks investing in hedge funds and private equity vehicles. Banking industry advocates argue the difficulty defining such funds means the provision piles red tape on to core banking activities such as loan securitisation, hedging, and capital-raising, all of which are often done within fund structures.

Further, they say, it has driven banks out of low-risk fund-management businesses, depriving them of revenue diversification and clients of options.

The irony, opponents of the rule say, is that banks are still allowed to make long-term equity and debt investments. The Volker rule explicitly allows such “merchant banking” activity. It is the fund structure, with the bank investing alongside others, that the provision targets.

Mr Volcker himself worried that the rule would become highly complex if regulators attempt to eliminate the role of judgment. “Bankers know what proprietary trading is and is not. Don’t let them tell you any different,” he said, recalling Supreme Court Justice Potter Stewart’s comment about pornography: “I know it when I see it.”

Narrowly written rules would only be gamed, Mr Volcker had warned. 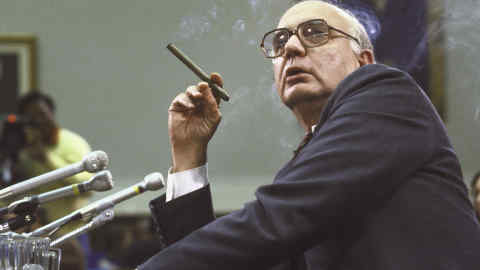 If the covered funds provision is dialled back, the industry will be satisfied with the rule that remains, one bank lobbyist told the Financial Times. Banks “have eschewed prop trading over the last 10 years . . . and they are fine with that, and with the idea that they can’t end-run the rule by investing in funds”.

“I think this is probably the last major push” at reforming the Volcker rule, Ms Massari said.

But not everyone thinks the law needs to be cut back. Ty Gellasch, a former Senate aide and Securities and Exchange Commission official who helped craft the original Volcker rule, said the activities the banks are concerned with are already permitted.

He pointed out that big banks, from JPMorgan Chase to State Street, have major asset manager affiliates, and that the covered funds provision was designed in part to prevent failures at funds operated by banks from imperilling the lenders themselves. That is why the provision also limits banks’ total exposure to any particular fund and to funds in general, and prohibits banks’ from bailing funds out.

He worries that these restrictions will be declawed if the rule is changed. “When the assets [in bank-run funds] are tested in a recession, we will find out if the weakened regulation still works,” Mr Gellasch said.

Sherrod Brown, the most senior Democrat on the Senate banking committee, told the FT: “Mr Volcker foresaw the dangers that lurk in bank investments that expose them to risks like leveraged lending that could amplify financial turmoil in a recession. Trump’s watchdogs are unwise to ignore his warnings.”