The US Commodity Futures Trading Commission is examining disclosures by managers of commodity funds that are popular with retail investors, the chairman of the derivatives regulator told the Financial Times, the latest sign of scrutiny for a sector shaken by the oil price crash this year.

Heath Tarbert, who was appointed chairman a year ago, said he was concerned that investors in commodity exchange traded funds were at times not provided with up-to-date information on the investments and strategies pursued by the funds’ managers.

Some of these vehicles, such as the popular United States Oil Fund, rely on futures contracts to help them meet their investment goals and needed to rapidly change their portfolios, with minimal disclosure, when oil prices crashed in April.

“We have seen certain instances out there where strategies have changed but the disclosure documents have not [and] that is something we are going to be focused on,” Mr Tarbert said in a phone interview, though he declined to comment on USO specifically.

Commodity ETFs have come under scrutiny in recent months with extraordinary volatility in oil markets and heavy losses suffered by investors in USO, which has lost 72 per cent of its value this year.

The dramatic trading in oil reached a peak in April, when a West Texas Intermediate crude oil futures contract, the main US benchmark, fell into negative territory for the first time in history.


US crude price per barrel on April 20

As prices crashed, many retail investors piled into cheap ETFs without realising prices could go negative and they could be exposed to heavy losses. The CFTC later issued a warning that funds using commodity futures do not behave like funds that invest in stocks and bonds.

Mr Tarbert said the commission was reviewing the events in an investigation led by its market intelligence unit, with assistance from a surveillance team housed in the agency’s division of enforcement.

Later this year, possibly in the autumn, the CFTC would release an in-depth report into the oil price crash, he said, similar to reports it has issued on previous moments of market disruption, like the 2010 flash crash.

Harold Hamm, the founder of Continental Resources, in April called on the CFTC to investigate whether “potential market manipulation, failed systems or computer programming failures” played a role in the plunge in prices below zero.

Energy is the world’s indispensable business and Energy Source is its newsletter. Every Tuesday and Thursday, direct to your inbox, Energy Source brings you essential news, forward-thinking analysis and insider intelligence. Sign up here.

“We can’t really say one way or the other at this point whether there in fact was any wrongdoing,” said Mr Tarbert. “It’s one of the things we’re looking to get to the bottom of.”

He said CFTC investigators were looking at the timing of trades in April as they sifted through order book data, but cautioned that supply and demand factors could explain the steep price declines.

The oil price has been hit this year by falling demand resulting from the economic fallout of the coronavirus pandemic at the same as Russia and Saudi Arabia had appeared set for a price war.

These forces were exacerbated by a lack of storage at Cushing, Oklahoma, the key US oil hub. The idea that physical places to store oil barrels might be in short supply “had not been something that I think factored into the minds of traders” before April, said Mr Tarbert.

The market has been yearning for clarity, to get things done, for a long time now

Twelve months into his chairmanship, Mr Tarbert said he would press forward with several new rules that would move the CFTC back from more aggressive regulatory positions staked out by his Democratic predecessors under the Obama administration.

Mr Tarbert said next week the commission would introduce a final version of a proposed rule on the regulation of cross-border derivatives transactions. The rule, opposed by the minority Democratic commissioners at the CFTC, would largely limit the agency’s supervision to US-registered entities, exempting foreign subsidiaries of big US banks, for example.

“We’ve pared back our extraterritorial application of our swap dealer regime,” he said. “Our rule . . . respects the regulatory remit of Europe and of the UK and other countries around the world, but it does capture risks that we think will ultimately affect the United States.” 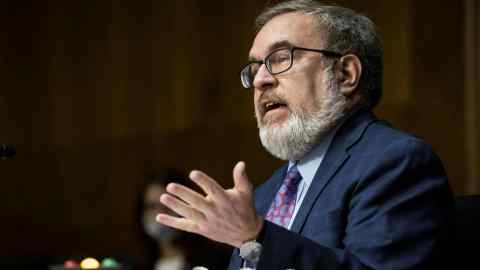 The CFTC is also set to vote next week on a rule that would pull back a 2016 proposal that called for swap dealers to hold capital equating to at least 8 per cent of the margin they collect on their positions. Instead, the new rule reduces that level to 2 per cent with the possibility of later revising it upwards.

In addition, Mr Tarbert said he expected to finalise before the November presidential election rules that would establish looser limits on the size of bets speculators can take in commodities like oil and natural gas, at the same time as providing additional exemptions from those limits for hedging transactions.

“The market has been yearning for clarity, to get things done, for a long time now,” he said. “It’s 10 years after the Dodd-Frank Act. We need to close out those items on the punch list.”