– GBP rises by over a percent against most major currencies
– Brexit talks to intensify
– To take place everyday, even on weekends 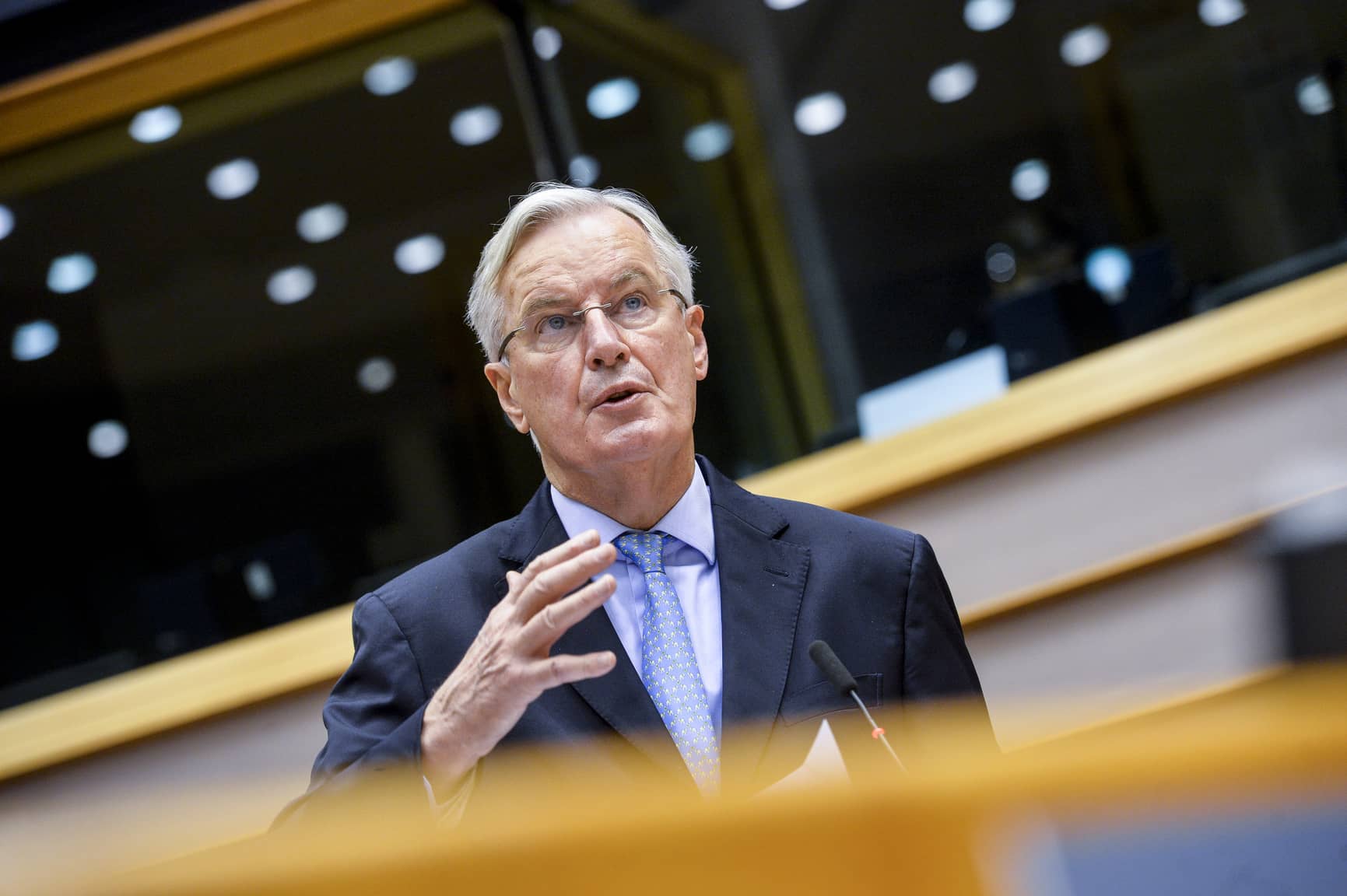 The British Pound recorded its strongest daily gain against the U.S. Dollar, Euro and other major peers since March amidst an upsurge in optimism that the EU and UK were headed towards a post-Brexit trade deal.

The Pound rose sharply after it was confirmed the EU and UK had agreed to intensify negotiations to the extent they would take place every day, and even on weekends, until a deal is achieved.

Sterling rose above 1.31 against the Dollar and closed in on 1.11 against the Euro after the EU and UK released a joint statement detailing the nature of further negotiations.

“The decision to move to daily talks (including weekends), with the negotiations across all elements of a potential deal continuing concurrently, suggests that the two sides expect to have some new substance to negotiate seriously over,” says Holger Schmieding, Chief Economist at Berenberg Bank.

But the Pound had already been rising ahead of this development with markets sensing movement following a statement delivered to the EU parliament by the EU’s Chief Negotiator Michel Barnier on Wednesday morning.

Barnier told MEPs the EU was committed to making the necessary compromises required to agree a deal, thereby meeting a UK wish that the EU signals a ‘fundamental’ shift in approach to negotiations. 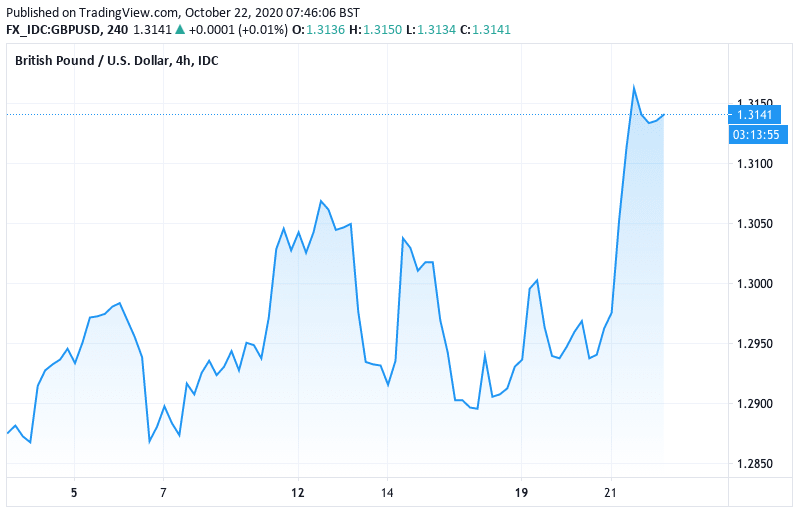 The UK’s Chief Negotiator David Frost spoke with Barnier on Wednesday afternoon in light of Barnier’s statement to the EU Parliament and “on the basis of that conversation we are ready to welcome the EU team to London to resume negotiations later this week,” read a statement from the Prime Minister’s office following that discussion.

The UK had been looking for the EU to commit to a fundamental change in approach to talks that would result in necessary concessions. Last week’s European Council summit saw EU leaders state that the sole responsibility for concessions lay on the UK side.

It appears Barnier’s briefing – that ultimately stated the EU must also make concessions – had delivered the kind of public assurances the UK was looking for.

“The pound soared yesterday on news that the UK agreed to resume negotiations and with the EU’s Barnier saying that a deal is “within reach”. Sterling rose to a six-week high against the US dollar and gained against the euro,” says Hann-Ju Ho, Economist at Lloyds Bank.

Above: GBP outperformance on Wednesday, Oct 21. With the Pound rising sharply it could be wise to set up an order that is triggered once your desired rate is reached. Such a move would mean you do not miss out in the event that a fast-moving market suddenly retreats from your ideal rate and an opportunity is missed. Learn more.

“We still expect a deal to perhaps provide a ‘buy the rumour, sell the fact moment’ and GBP to underperform in the medium-term. But we believe now is the time to buy into the potential for a last-minute deal before mid-November and with it we expect a higher GBP in the short term at least,” says Jordan Rochester, Global FX Strategist at Nomura.

The two negotiating teams agreed to use the final phase of negotiations to work through the legal texts established by both teams, a development the UK has long called for but the EU has to date refused.

Lead negotiators have committed to moving “as quickly as possible to a read through of both texts, with a view to identification of areas of convergence, which could be expressed either in a two/three-column table or consolidated texts depending on which tool lead negotiators deem most appropriate”.

These are the kind of practical developments that are typically associated with the striking of a final deal.

“Since working out the joint legal text is usually the final stage of any international agreement, it signals that the two sides must be in general agreement across a sufficiently large number of areas already,” says Schmieding.

“The positive shift in risks towards a sensible outcome that avoids a hard exit tilts the risks to the UK’s medium- and long-term economic outlook to the upside. A deal by 31 December when the UK leaves the single market – plus likely measures to ease the switch in sectors not covered by the agreement, such as parts of financial services – will mean much less disruption on 1 January 2021 versus a no-deal outcome,” he adds. 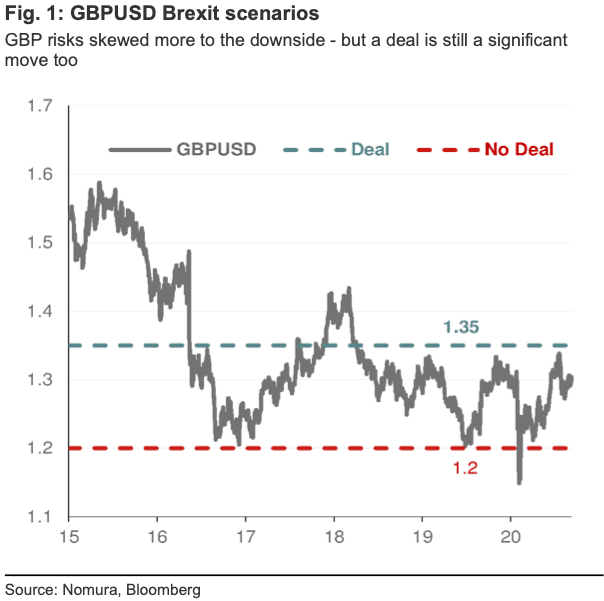 Nomura strategists recommend buying GBP/USD with a maximum target of 1.35 on the basis that a ‘skinny’ free trade deal is achieved.

Economists at the investment bank see a 60% probability of a deal being reached, which appears to be lower than the odds assigned by the market given the recent move higher in Sterling.

Positioning in Sterling is meanwhile said to be light which mitigates against any technical-based flows. (See the latest consensus GBP/USD forecast estimates and targets from the world’s major investment banks here). 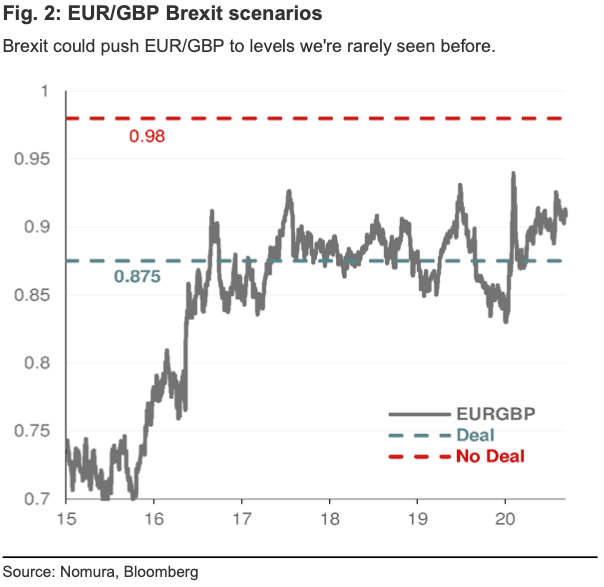 The above chart on EUR/GBP suggests there is little upside to be had for Sterling against the Euro.

A EUR/GBP target of 0.8750 gives a GBP/EUR target of 1.15. (See the latest consensus GBP/EUR forecast estimates and targets from the world’s major investment banks here).

Negotiations are expected by political commentators to stretch to the first week of November, but the Telegraph reports the EU’s preference is for an agreement to be found by the end of the month.

A deal needs to be reached by negotiators by a mid-November deadline which will allow EU leaders the chance to give their blessing at a European Council summit.

A deal would then need to be ratified by the European Parliament for it to come into law before year-end.

Those watching Sterling exchange rates must be aware that volatility is likely to remain a feature of coming days and weeks as there is a strong possibility that there will be some issues that will only be agreed by Johnson and EU leaders around the EU summit.

There is still a political incentive on both sides to be seen to be holding out to the very end, and a photo finish at the EU summit will likely suit Johnson and his EU colleagues.

This creates the conditions for further volatility in the Pound.

“We think that GBP-USD will probably remain capped above 1.31 in the absence of further news hinting that a compromise to avoid a no-deal Brexit outcome is very close,” says Roberto Mialich, FX Strategist at UniCredit Bank.

Invest in Spanish Property. A selection of discounted properties due to the covid-19 crisis, online viewings and transactions possible. Download the Guide